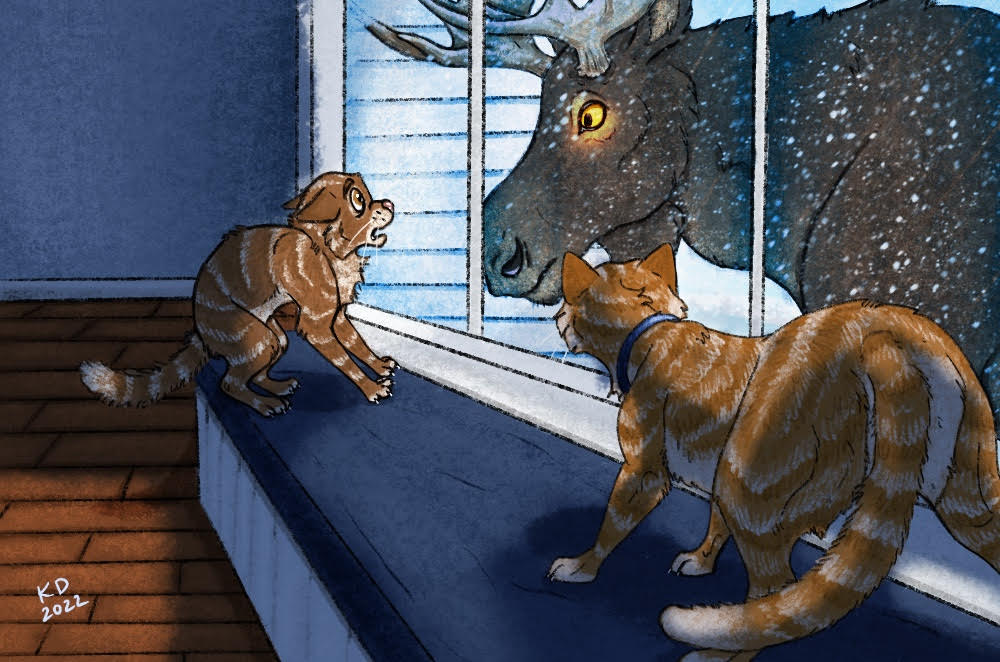 A Spirited Encounter with Gary and Morris

It was a cold and dark winter afternoon at Hervey Cats. A visitor was chatting with Marjorie, the shelter owner, about some interesting theories they had about their cat.

“I swear to goodness, he sees things I can’t!” said the visitor.

“I know what you mean! It’s like they get spooked by things we will never understand,” said Marjorie.

“I’m convinced he can see ghosts,” said the visitor. “You should see the way he acts at night, sitting on the edge of my bed and growling from time to time.”

“Oh my! That sounds a little spooky!” said Marjorie.

Gary and Morris had just rounded the corner as they were doing their final tour of the shelter before nightfall. The day had come to a close and it was their ritual to do a once over of the main floor before the owners locked up for the night. Both cats rubbed against the visitor’s legs before they left through the front door.

The cats turned back, looking inward on the shelter.

“Another day is done,” said Gary.

Morris turned around to look back out the front door and froze.

“Do you see that?” said Morris.

Gary turned around and also froze. He then started to hiss and make a noise so hideous you’d think he was in great distress.

They were staring directly at a giant moose.

The shelter staff came running over to see what the commotion was.

“Oh my gosh you two,” said Marjorie. “What is the matter?”

“That is one big moose!” said Gary.

“That caught me off guard!” said Morris.

“Moose get really big! Do you remember the one we met at Christmas? Bullwinkle?” said Gary.

“He wasn’t as big as this one!” said Morris.

The moose, which had been still up to this point, sharply moved its head so it could see inside. It then made a loud, unnatural grunting noise.

The cats were so spooked. Gary did a backflip and they both ran behind Marjorie.

“What is with you two?” said Marjorie.

Suddenly the moose was gone.

By this point, the rest of the staff had gathered and were asking Marjorie what had spooked the cats.

Gary and Morris decided to head upstairs and grab a warm spot by the window.

“What do you think he is doing?” said Morris.

“Well, around here there are plenty of willow bushes for them to snack on,” said Gary. “And this late into the year he must be hungry.”

The next morning, Gary and Morris went outside to look at the tracks the moose left, but there weren’t any…

“What’s going on?” said Morris. “There is nothing here.”

“Yeah. I don’t understand,” said Gary. “We saw him standing there last night and all the other prints are here from yesterday.”

The two cats walked around the shelter looking for clues; a piece of fur, a print, a smell, even moose pee!

“That is so odd,” said Gary. “We all saw the moose. Even Marjorie and the shelter staff saw him. Didn’t they?”

The cats went back inside, and the rest of their day went as normal. They greeted visitors, played with the other cats, dispersed some food to the local animals from their food stand, then went back inside when things got dark.

The two cats were getting ready to curl up for the night when they heard the sound of breaking glass and a scream. Gary and Morris leapt to their feet and darted down the stairs. Marjorie was standing with a broken lamp at her feet. One of the other cats had been spooked and knocked it off the table.

Gary and Morris found the spooked cat, Peanut Butter, and asked her what was going on.

“I saw… I saw… this giant creature,” said Peanut Butter.

“Really tall,” said Peanut Butter. “I was standing by the window, giving myself my evening bath, when I looked through the fog on the glass and saw a giant eye staring back at me!”

The cats went out the cat door and around to the side of the property expecting to see a giant moose near the shelter. Instead, they once again found absolutely zero traces a moose had even been there.

“There is nothing here. It looks untouched,” said Morris.

“I can’t believe it. Again. What is going on?” said Gary.

The cats decided to do a little tour of the property to make sure there wasn’t a giant moose hiding. After doing a few laps, getting further away from the property each time, they decided to head back inside.

Both cats were upstairs, by the window, giving themselves their evening bath when they saw something move outside.

They looked at each other and both exclaimed, “The moose!”

Gary and Morris darted downstairs and back out the cat door, bolted across the field in the back of the property, and finally caught up with the moose.

The moose was moving slowly. It turned its head to look back at them.

Everything was dark. Even the moose seemed darker than usual, but its eyes were piercing. The cats felt their entire bodies freeze up when the moose looked back at them. Gary and Morris were both trying to get words out when they heard a whispy voice.

The cats stood in their tracks unable to move.

“You protect the forest…”

Gary broke his fear and yelled back.

The cats heard the voice again.

“The animals thank you.”

“What are you two doing?”

She had followed them outside.

Both cats were standing still with their fur standing on end as if they had just stared down another cat for the first time.

“What are you looking at? There is nothing there! Come inside you silly cats.”

The cats were still staring at the moose who slowly turned its head back forward and then marched gently into the darkness.

“Come inside,” said Marjorie. “I have treats!”

Both cats ran over to Marjorie’s feet and followed her back inside. It was very cold out.

“What has gotten into you two?” said Marjorie.

Gary and Morris were chatting while eating their snacks.

“What do you think happened?” said Morris.

“I don’t know, but that voice didn’t seem like it was coming from that moose,” said Gary. “It felt like… something else.”

“I know what you mean. I don’t know how to explain it,” said Morris.

“I don’t think that moose was looking for food…” said Gary.

The two cats could overhear Marjorie on the phone talking to a friend.

“It was the strangest thing! They darted outside twice as if they were chasing something, and earlier they got all freaked out at the front door. I swear, it’s like they can see things we can’t!”