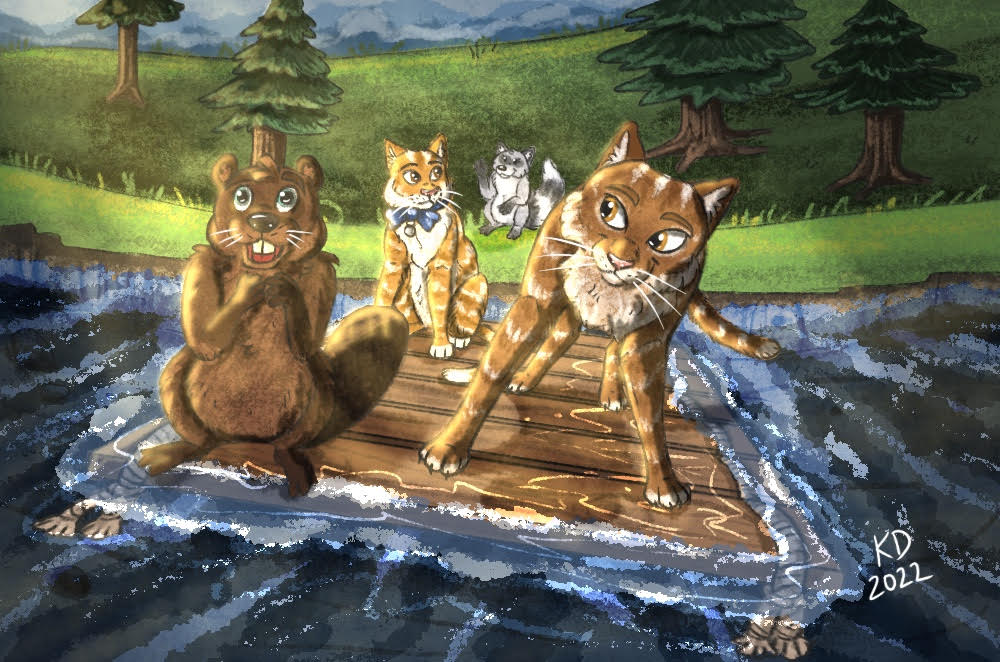 Garry and Morris Build a Raft

Spring was undoubtedly in the air and both Gary and Morris were hungry for adventure.

“I can’t wait for summer,” said Morris. “It feels like it’s right around the corner!”

The sun was out and blanketing the cats with its warm rays. Gary and Morris rolled around on the pavement outside the shelter.

“The heat feels so nice on my coat,” said Gary.

“You said it!” said Morris.

The front door of the shelter opened, and they saw Marjorie come outside with a couple of volunteers in tow. The group was moving a bunch of old wood planks outside and into the backyard.

Gary and Morris, being the cats they were, refused to be left out and decided to follow along as the people carried the boards outside. They then both climbed up on the pile of wood after everyone went back inside.

After some stretching, scratching and sniffing, both cats decided to go for a walk down by the river and maybe visit some of their woodland friends.

Terrance the beaver was hanging out by the water’s edge and when he saw the two cats stroll by, he hopped onto the riverbank.

“Indeed it is,” said Morris.

“What brings you guys down by the river today?” said Terrance.

“We just figured it would be a nice way to take in this warm weather,” said Gary. “While also running the chance we might see some friends, like you!”

Terrance seemed to like that and gave the cats a bit of a smile.

“Yeah it is up over six inches right now,” said Terrance. “With the ice melting up North, we have lots of action on the river and the pace is pretty quick these days. If you boys had a raft, you could go on a real adventure.”

The two cats looked at each other.

“We don’t have a raft and that just sounds like a bad idea,” said Morris. “How would we get back home?”

Terrance pointed at the banks.

The two cats patted Terrance on the back and reassured him they wouldn’t be doing that, then walked back to the shelter in silence – they were thinking. Thinking about the fact they’ve been so bored lately, the idea Terrance put in their heads, and the fact there was a pile of scrap wood planks outside the shelter as of this afternoon.

Gary cut him off.

“With help from some friends, I think we can,” said Gary.

The cats ran down to the water’s edge again to find Terrance and ask if he could help drag the planks down to the riverbank where they would assemble their raft. Terrance was down to help and got to work right away.

Next, the cats needed to find their raccoon friends and ask them to lend their opposable thumbs to the project. The planks need to be bound together with rope or vines, then tied at the ends. Raccoons can do this best as their hands are just like a human’s!

After walking around the forested areas near the shelter, the two cats found their raccoon friends and explained the situation. In no time, mama raccoon had volunteered to join them while papa stayed back with the babies.

After about four hours of building between Terrance, mama raccoon and both Gary and Morris, the raft was ready to go!

“It really does,” said Terrance. “Though that’s no surprise considering I worked on it. I always do good work.”

Mama raccoon just giggled a bit and the two cats started to push the raft towards the water.

“Terrance, Mama, won’t you join us on our journey downriver?”

“I have to get back home to my family,” said Mama Raccoon. “I would love to otherwise.”

Terrance looked at the cats and assured them he had nothing in his schedule, and that he rarely does in the first place beyond his never-ending urge to build.

So, with the beaver and both cats aboard, Mama Raccoon gave the raft its final shove into the water. She then waved as the three friends and their raft drifted down the river.

“I don’t know how either of you can be so surprised. This design was well thought out,” said Terrance.

Gary and Morris looked at each other and laughed.

As the minutes moved along, so too did the raft and the different sights the three animals were seeing. They had never had this view of the city before.

“It’s interesting to see how close some neighbourhoods really are, they just have a river flowing through them!”

Suddenly, the current picked up and the water was moving really quickly.

The raft started to bounce around a bit more as they moved through the quicker parts of the river.

After coming around a corner, the three animals noticed there was a bridge with a major footing right in their path.

“With the speed of the river, and the size of that footing, if we can’t move out of the way we are in trouble!” said Morris.

The cats both grabbed onto Terrance’s arms and held on for dear life as he fluttered his big tail to steer their raft just a few inches shy of the bridge footing.

All three animals sighed a huge sigh of relief.

“That was a little too close,” said Gary.

The water was still moving quickly and the cats were feeling nervous. Cats really don’t like being wet and there was water splashing all over them.

“I really wish the river would calm down,” said Morris.

“This is what it is all about,” said Terrance.

The three animals held on as the river pushed and pulled on their tiny raft.

Just as soon as Gary had vomited, the water seemed to slow down and things were calm once more. The raft drifted along gently as the cats asked Terrance about his experience on the river and what else they might expect.

“So, all in all, I haven’t spent a ton of time down this far, though I have ventured here in the past for some really premium logs for my dam,” said Terrance. “At this point, I would say we are about two kilometres downriver from where we left off.”

“Now would likely be a good time to jump off,” said Gary. “So, let’s see if we can just get…” he stopped talking and stared at the coastline.

Morris looked over to see what Gary was staring at and saw a giant lynx standing by the river’s edge.

The three animals locked eyes with the lynx as their raft floated by. It looked defensive, tough as nails, and as curious as it gets. Imagine its thoughts of seeing a beaver and two house cats cruising down the river on a raft.

Once a few hundred metres down past where they saw the lynx, the cats and Terrance hopped off their raft.

“Feels odd to be on dry land again,” said Gary,

“I am in the water and on land both so frequently that none of this means anything to me,” said Terrance. “We have a long journey ahead of us. Hopefully one without any lynxes. So, let’s get started!”

Terrance and the cats had about three kilometres to cover in order to get back to their original launch spot by the beaver dam. The sun was starting to set and as Terrance had noted, there was a lynx further up past the river. As a result, the three animals decided to walk down the opposite side of the river from where they saw the lynx.

Just as they got started, they could hear dogs barking.

Terrance had found a big bush by the river’s edge where all three could hide. The dogs were there with their humans and could be heard quite clearly. That said, it didn’t seem like they were very close, and it also sounded like they were moving on. It was likely they were all just on a walk down by the river. Gary, Morris and Terrance decided to keep walking.

The three animals shared stories and their philosophies about what makes humans tick. It was a fun walk for them and luckily one that was lynx-free. By the time they got home, it was dark out. The cats bid adieu to their friend Terrance and thanked him for accompanying them on their adventure.

The cats could hear Marjorie calling their names in the distance.

Gary and Morris ran back up to the shelter where they saw Marjorie at the door. She was getting ready to close the place down for the night. Both cats ran by her legs and in through the door.

“I haven’t ever been out on the water before and to be honest, I was a bit scared,” said Morris.

“You certainly did,” said Morris. “And I will ask you not to do so again.”

The two then curled into a ball and fell asleep.