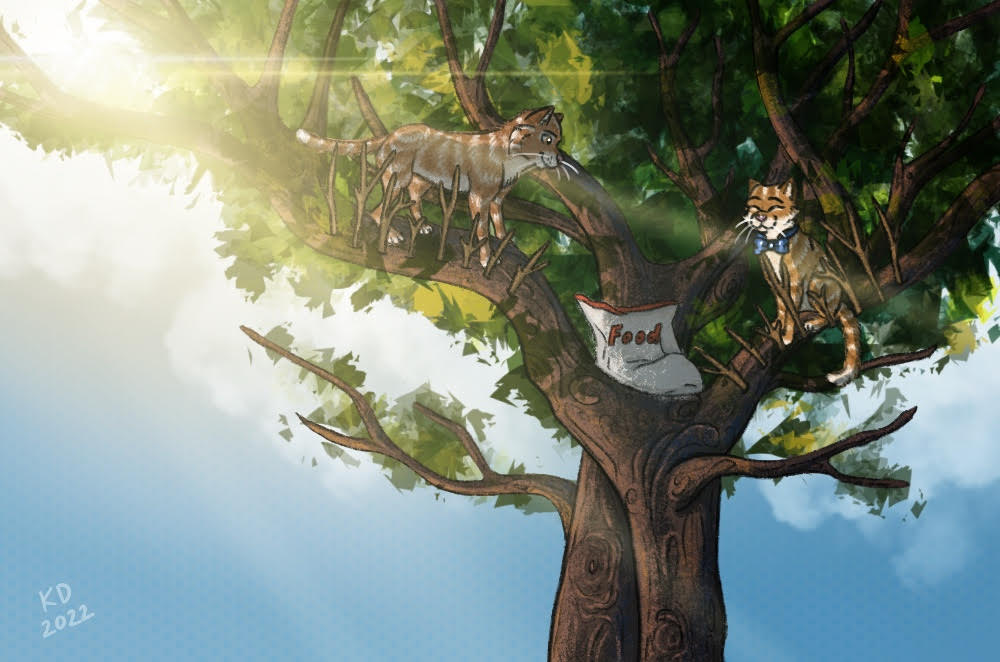 Gary and Morris Build a Treehouse

It was a rainy day in early September when Gary and Morris found themselves sitting inside the Hervey Cats Shelter, staring out the window.

“I wish we could still get outside in the rain,” said Gary.

“I agree,” said Morris. “But what can we do? We hate being wet and sometimes it rains all day!”

“I know, I know,” said Gary. “It just drives me nuts having to stay inside all day. I don’t mind the company, but I much prefer to be outdoors.”

“I second that!” said Morris.

The two cats sat there staring out the windows, listening to the drops of water hit the panes of glass, each one with a light thud.

It was warm inside the shelter, but their hearts still longed to be outdoors. They thought about their woodland friends, who would be inside their shelters, dry, warm, and free of the elements, yet still outside.

They waited a minute.

“I’ve got it!” said Morris. “Let’s build a shelter outside!

“That’s a great idea, but where?” said Gary.

“What if we built a shelter on the shelter property?” said Morris.

“What the heck are you talking about?” said Gary.

“I mean, let’s make something nearby so we can be outside in the elements, but still close to home,” said Morris. “Let’s make a shelter on the shelter property.”

“Oh okay. I follow,” said Garry. “Once the rain stops, let’s walk around the property and see where we might be able to do it!”

A few hours passed and the rain finally let up. The sun came out and started to bake the property in its warm light.

Gary and Morris ran outside to tour the grounds. They started in the front and decided it would be too close to the road – neither wanted noisy cars near their spot, so they walked further along to the side of the property.

The side had some nice nooks and crannies, but they wanted to be both close to the shelter and their woodland friends, so they headed to the back.

The back didn’t have a ton of hiding spots on the ground, but it did have a big old tree with branches that reach out to the shelter roof. The best part about it was it had a nice flat area at the top, and the shelter was climbable, as both cats had learned last year. If they set up in this tree, they could use the shelter like a staircase and run across the branch to their spot.

“The leaves of the tree will work well to keep us dry during the rain,” said Gary.

“And the branch is a great way to enter safely!” said Morris.

The cats were now milling around on the flat spot at the top of the tree trunk.

“What should we bring?” said Gary.

“Agreed. We will need some structural elements, too,” said Gary.

“What are you thinking?” said Morris.

“I’m thinking we try to bring some sticks in and put some walls up. It’d be nice to have a nap here and not worry about rolling off,” said Gary.

Both cats walked along the branch to the roof of the shelter, then hopped down, and ran into the valley/forest to grab sticks.

After an hour of stick collecting, they brought them up to the tree.

“How should we put these up?” said Morris.

“Let’s use our claws and fangs to dig little trenches into the tree so we can slide each stick in place!”

The cats got to work and managed to carve out notches in the tree. Enough notches to make some short walls to prevent them from rolling off.

“Let’s keep one side short so we can still see out!” said Gary.

The cats finished up their work and then decided to head down to the shelter and bring some snacks back.

Once inside, they realized they had a bit of a problem.

“How do we bring a bunch of food up to the tree?” said Gary.

“Good question. We are cats. We can’t carry anything,” said Morris.

“Let’s drag the bag over and see if we can jump it up onto the roof,” said Gary.

Morris agreed enthusiastically and they decided to drag a small bag of cat kibble out the front door and over to the spot where they jump onto the shelter roof.

Both cats managed to get the bag to the spot where they jump on the roof, but it was too heavy to actually jump up there holding it with their mouths. They stood there for a few minutes, pondering what to do next.

Suddenly, a bunch of Canada Geese flew by and Gary had an idea!

He motioned at the geese to fly down towards them. A few of the geese touched down in front of the cats, careful to not get too close, to have a conversation.

“We were wondering if you could help, oh mighty geese,” said Gary.

“In what way?” barked another one of the geese.

“We need help moving this bag of food into that tree,” said Gary.

The geese looked at each other for a bit. They then had a quick huddle to discuss their options.

As the geese turned back to look at the cats, one of them said, “You’ve got a deal if we can try some of this food.”

Gary and Morris then looked at each other, quickly whispered between themselves, then turned back and said, “Yes. You have a deal.”

The geese grabbed the bag with their beaks and lifted it up to the tree while the two cats bolted up the side of the shelter, across the branch and into the tree.

With the bag in the tree, the geese ducked their heads and sat down on the flat space. Gary and Morris then carefully opened a little square in the bag. All the animals chowed down on some dry cat food.

“Thanks for your help, what are your names?” said Morris.

“No problem!” they all said.

The geese then introduced themselves.

“People call me Bill!” said the last one.

“Well, thanks for the snack, but we must catch up with our flock,” said Bill.

The geese took off into the air honking away. As they flew off, the cats continued to snack on some dry food and watch over the backyard.

“Indeed, it was,” said Morris. “And we made some new friends!”

The two cats then walked back across the branch and used the shelter to jump down to the ground. The sun was starting to set, and it was time to get back inside. Marjorie, the shelter owner, would soon be calling their names so she could lock up for the night.

Gary and Morris ran back indoors and curled up near their favourite window.

“I feel quite accomplished,” said Morris.

“As do I,” said Gary. “We are like professional home builders now.”

“We should go into business!” said Morris.

Suddenly they heard gentle taps against the window. It was raining again!

“If this keeps up, we can test out the shelter in the morning,” said Gary.

“Indeed, we can,” said Morris.

Then they both curled up and fell asleep.