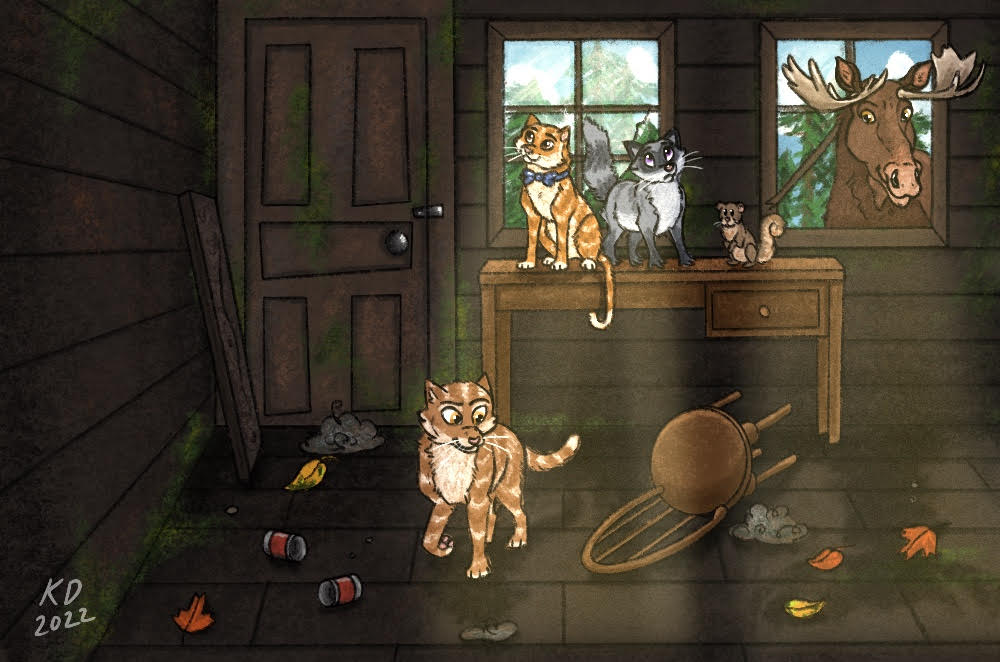 It was a lukewarm summer day in Alberta. A reprieve from the hot sun as of late. Gary and Morris were taking advantage of the mild weather and having some fun outside. As cats with fur coats, the two tend to get hot quickly when the temperature climbs. In the summer, they never miss a chance to get outside on an ice-cool day.

The cats were playing down in the wooded area near the shelter, spending some time with a few of their wild animal friends.

“Catch me if you can!” yelled Morris.

Suddenly he leapt out of a bush and took off running as fast as he could, with Gary, Joey the Squirrel, Bullwinkle, and Mama Raccoon in tow.

Morris was really moving. He jumped over a giant log, under a fallen birch tree, and through a bunch of tall grass until he reached the riverbank. With nowhere to go, he waited for the rest to catch up.

“There he is!” shouted Joey.

Gary ran over to Morris and jumped on his back.

Joey and Mama Raccoon caught up shortly after.

“We thought WE were surely lost, but Mama Raccoon saw Gary make the last turn and we made it!” said Joey.

Suddenly there was a loud crack and the sound of a tree falling. All the animals shot their eyes over to the treeline only to see Bullwinkle crashing through a bunch of thick brush. After making it to the river’s edge, he slowly saddled over and lay down.

“I lost you guys almost as soon as we started, so I just listened to your voices and ran straight through the bush,” Bullwinkle said with a smile.

“Well, your body is so big, you don’t have to stick to the path,” said Joey.

“And somehow your body is so small you don’t have to either,” said Bullwinkle.

“I am governed by the honour system,” said Joey. “You may have heard of it!”

“You are right,” said Bullwinkle. “I should have more respect for the honour of impromptu forest races.”

“Well, you got him there,” said Gary, sarcastically.

The animals all lay down in the shade and watched the water go by. Some ducks swam past while they were lounging, Terrance the beaver was hurriedly swimming back and forth with logs in his mouth, patching up his dam, and a family of geese made a low pass, saying hi to the gang of creatures as they went.

Suddenly, Gary saw something red amongst the trees. It was unusually tall, well, at least it had to be due to where he was able to see it. There was a slight clearing about halfway up the trees along the riverbank, and this red colour was flashing out from inside the forest.

“What’s that red thing over there? I’ve never seen it,” said Gary.

“That’s the old human house,” said Joey. “Or what is the word? Cabin?”

“I’m surprised you haven’t seen the cabin before!” said Bullwinkle.

All the animals got up and made their way over to the spot where Gary saw the red colour amongst the trees.

At the forest’s edge, near the cabin, there looked like there was once a path that had now been overgrown. Bullwinkle went first to knock down the overgrowth, and the rest of the animals followed closely behind.

As they walked through the path, they saw old wooden signs nailed to trees. Things like ‘Stay out!’ and ‘Private property!’ were painted on them.

After walking down the path for about a minute, the animals reached a clearing where the cabin resided. It was full of mossy rocks, tall trees, tall grass and other vegetation.

The building itself looked pretty rough, with most of the shingles fallen off, or in the process of falling off. The window frames were full of moss and some of the glass panes were broken or missing. There was even a crack in one of the walls where you could actually see inside!

“Look at this place!” said Morris. “Should we go inside?”

The animals all followed Joey as he jumped on a small tree that had grown next to the cabin. As quick as electricity, he ran up the side of that tree and onto a windowsill. Sadly, Bullwinkle was far too large to climb the tree, and enter through a window pane, so he stuck his head through another window that was missing all its glass.

“It is very dusty in here,” said Bullwinkle.

The crew of smaller animals, one by one, entered the cabin through a missing pane of glass. Bullwinkle was right, it was VERY dusty. All the animals had their feet coated in it. As they got inside, they all jumped down onto a desk and then onto the floor so they could get their bearings. Bullwinkle was there to provide the birds-eye view.

“Everyone make it in?” chirped Joey.

“Looks like we are all here!” said Mama Raccoon.

Once the animals made sure they were all okay, they started exploring. The cabin wasn’t large – only 2 bedrooms and a single room that looked like a living room, but with kitchen appliances in it. Everything was very dusty and dirty, and there was a lot of garbage in there.

“I see the young humans come in here sometimes,” said Joey. “I sit up in the tree and watch to see what they are doing!”

“And what are they doing?” said Mama Raccoon.

“I don’t know. It’s hard to see when they are inside,” said Joey.

The rest of the animals all shook their heads, including Bullwinkle, whose horns ended up knocking a bunch of old books off a shelf.

Gary and Morris decided to check out one of the bedrooms. There wasn’t much in the way of furniture in there, but there were a bunch of old car parts, some empty cans and a small table.

“Not very interesting is it?” said Gary.

“Not really,” said Morris. “I want to ask Joey a question.”

Both cats went back into the main room.

“When was the last time you saw humans come here?”

“That would have been many moons ago my friend,” said Joey. “Like, many. Years!”

“I wonder if they are coming back?” said Morris.

Mama Raccoon piped up, “I can shed some more light on this! I found this place a few months ago and I was curious about that same thing. I talked to Darryl the tortoise and he told me the place hadn’t been occupied in decades, and there hadn’t been visitors in years.”

“Wow!” said Gary. “Am I thinking what you are thinking, Morris?”

“I think we should clean this place up and make it our own,” said Morris. “At least for now!”

The animals all seemed in agreement.

“What about Bullwinkle?” said Joey.

“I am happy to just hang my head through this here window,” said Bullwinkle.

“I am sure we could figure out how to open up the front door,” said Gary.

Bullwinkle shrugged then trotted around to the front of the cabin where the other animals were waiting for him. Joey sat on the lock and turned it to the unlocked position.

“Bullwinkle, it shouldn’t be locked anymore,” said Mama Raccoon. “Give it a good hit!”

Bullwinkle backed up, then pawed at the ground with his left hoof, and ran straight into the door. With a loud bang, it flung wide open.

With that, all the animals got to work cleaning up the cabin. Joey was gathering all the small items and moving them outside, the cats had the medium objects covered, and Bullwinkle had all the large ones. Mama Raccoon was especially helpful with her opposable thumbs. She could pick up and handle complex items and figure out if they should stay or go.

After cleaning the place up, they decided to decorate it with items from around the forest – branches, leaves, pine needles and more. Not long after, they had put together a wonderful-looking place!

Bullwinkle lay on the floor and stretched before letting out a big yawn.

The animals all agreed and decided to take a break. As a group, they lay down together and dozed off.

A couple of hours passed, and the group woke up realizing they had slept for most of the afternoon and into the evening.

The group got up and brushed off their sleepy eyes.

“We should all get back home, but before we do, we should agree on the purpose of this place,” said Gary.

“I think we should keep it a secret!” said Joey.

“I’m not so sure about that,” said Morris.

Then Mama Raccoon chimed in.

“We should keep it open to our friends and family. This is a place we can use to get away from the elements, to be warm, and to have a safe nap. This place can be so much to all of us!”

The animals all waited a moment, then agreed that Mama Raccoon was right. It should benefit everyone, and it was best to keep everyone safe and sound instead of a select few.

“Well, with that in mind, it’s time to go,” said Bullwinkle.

The animals all walked outside and closed the front door. Bullwinkle nudged a big enough rock in front of the door that it would be a chore to move unless a larger animal was near. That was okay though, as the cabin was still enterable by smaller creatures via the missing windows.

The odd bunch all walked together through the forest; a moose, a squirrel, a raccoon, and two cats. They were all happy and excited to share their new place with their friends.

Once they got to the edge of the forest, Gary and Morris waved goodbye to everyone.

“Thanks for a great day, friends!” said Gary.

“I second that,” said Morris.

The cats ran across the tall grass and towards the shelter just as the sun was starting to set. It was getting close to when Marjorie, the shelter founder, locks up for the night so they wanted to get home quickly.

Gary and Morris got up to the shelter just as Marjorie opened the door to call out their names.

“There you are!” said Marjorie.

The cats brushed up against her leg and ran inside.

“Looks like we have a new cabin!” said Morris.

Both of them then ran upstairs and lay down in front of their favourite window, dozing off for a second time that day, but this time, it was for the rest of the night!