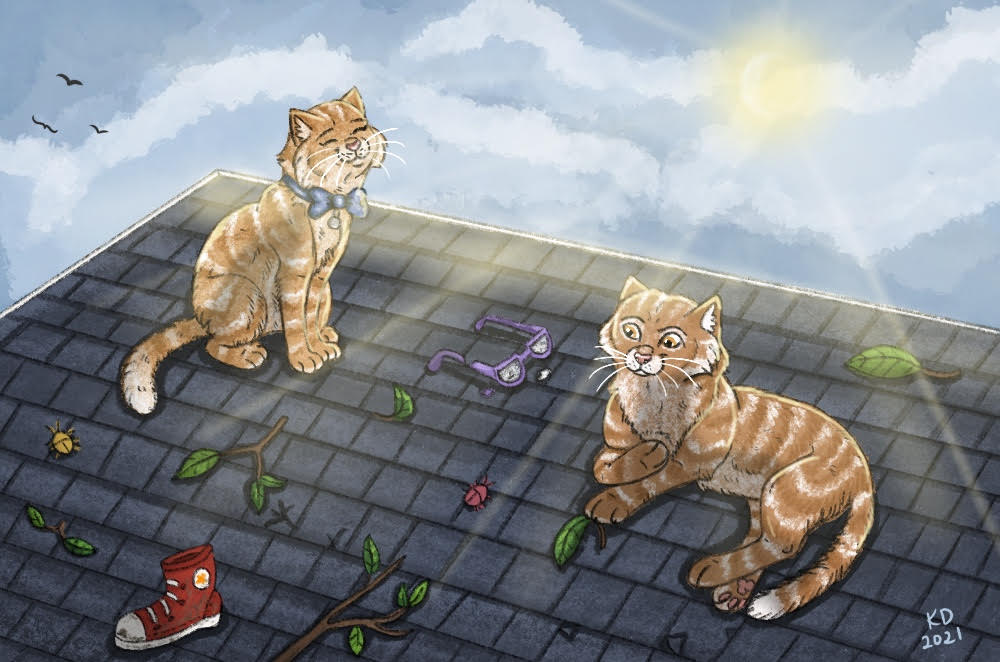 It was a warm summer day at Hervey Cats when Gary and Morris were trying to figure out what to do for the afternoon.

“We should go for a walk! I know some houses down the street that give out treats,” said Morris.

“We already have a ton of treats here and I’m looking for a little more adventure than just a walk,” said Gary.

“What about going to the watering hole?” said Morris.

“Nah. Not the watering hole. Something more… exciting!” said Gary.

The two cats went back and forth for a while trying to figure out what their next adventure would be when suddenly they heard a bird land right above their heads.

“I’ve got it!” said Gary. “Let’s climb the building and hang out on the roof!”

Morris nodded in agreement and the two went outside to the backyard.

“Hmm. This isn’t going to be as easy as I had thought,” said Gary. “There’s hardly anything to climb on.”

Off in the distance was a small tree with many branches sitting next to the shed. Both cats knew immediately they could use it as a springboard to get all the way up to the roof of the shelter.

“Hey! That’s perfect. That will get us up halfway and we can probably jump off one of the branches,” said Gary.

Gary and Morris started climbing up the tree, one-by-one. Some of the branches were still young and Morris fell to the ground and had to start again. Eventually, Gary found a branch strong enough to hold him and leapt as high as he could to the roof of the shed.

Morris followed behind him and the two were up on the shed!

“Maybe for you! I fell!” said Morris.

“You’re fine! Look at you. You have nine lives!”

Morris grumbled and turned his focus to all the stuff on the shed. Sticks, leaves, and dirt. Lots of dirt.

“I wonder why the humans don’t clean their roofs?” said Gary.

The cats walked around, and as is their nature, knocked all the objects off the roof.

“What the heck is this?!” shouted the groundskeeper. “I just cleaned up the yard!”

The cats moved back from the edge of the shed’s roof and focused on how they were going to get to the shelter’s roof.

“How should we get up there?”

“Let me see something,” said Morris.

Morris walked up to the side of the building where there was a steel pipe running up the side. About 18 inches along the wall from where the pipe was, was another small adjacent wall.

“I think I can Jackie Chan this corner,” said Morris.

“What is a Jackie Chan?” said Gary.

“I’ve heard humans say it before jumping like this,” said Morris.

In an instant, Morris jumped as high as he could, bounced off the pipe, towards the small wall, then bounced off that and onto the roof.

“You have to try,” said Morris.

Gary gave it a few tries but each time he would fall back down before reaching the roof. He tried and tried but just couldn’t do it.

“Give me a minute,” said Morris. “I’ve got another idea.”

He then turned away from the ledge and disappeared for what felt like forever. After what was really just a short period of time, but felt long because cats don’t understand time, Morris returned pushing what looked like a big pile of shoes.

“What are those?” said Gary.

“Shoes!” said Morris. “Humans must have thrown them up here while walking by.”

Morris shoved the shoes over the edge. There must have been at least 15 of them. Gary then pushed them into a pile and tried the double-jump Jackie Chan move… and made it!

Both cats stopped and looked up at the skyline.

“What a view,” said Morris.

After a moment of reflection, both cats lay about, stretching in the sun, rolling around, and fighting with the leaves and insects that flew by in the wind. They fell asleep and had a nice nap in the summer heat.

They also managed to push a whole bunch of things over the edge of the roof.

“Well, it has been a blast, but we should make our way back down,” said Morris.

The pair walked over to where they came up and immediately realized it was too high up for them to jump back down.

“I think we are on the same page,” interrupted Gary. “I am NOT jumping down that far.”

“How did we not think of this?” said Morris.

“We are cats. We do this all the time,” said Gary.

After some deliberation, both Gary and Morris agreed they needed help, so they started meowing as loudly and frequently as possible. Unfortunately, the sound of the cars going by seemed to drown it out though.

It was a Saturday and weekends are usually busy at the shelter. Gary realized they could knock things off the roof onto people walking in and out of the shelter, and when they looked up to see where it came from, they would meow as loudly as possible.

The cats started gathering items from the roof to knock down onto the ground. They found an old uniform, another shoe, a pair of broken glasses and a whole bunch of leaves.

A young family approached the shelter and Gary knocked the uniform down, but a gust of wind caught it and blew it into traffic. Cars started to honk, and nobody could hear them meowing.

Just a few minutes later, one of the volunteers came out and Morris pushed the glasses off and they fell right in front of them. The volunteer picked them up and looked around.

“How do glasses just fall from the sky? Is someone on the roof?”

They looked up and locked eyes with Gary and Morris who were meowing up a storm.

The volunteer rushed back inside and shortly after a ladder was against the building and they were climbing up to the cats.

Very carefully, both cats were brought down on the ladder and placed onto solid ground. They were given treats

“We need to be a little more careful next time,” said Morris.

“Agreed. Whenever you go on an adventure, always have a plan for coming back home,” said Gary.