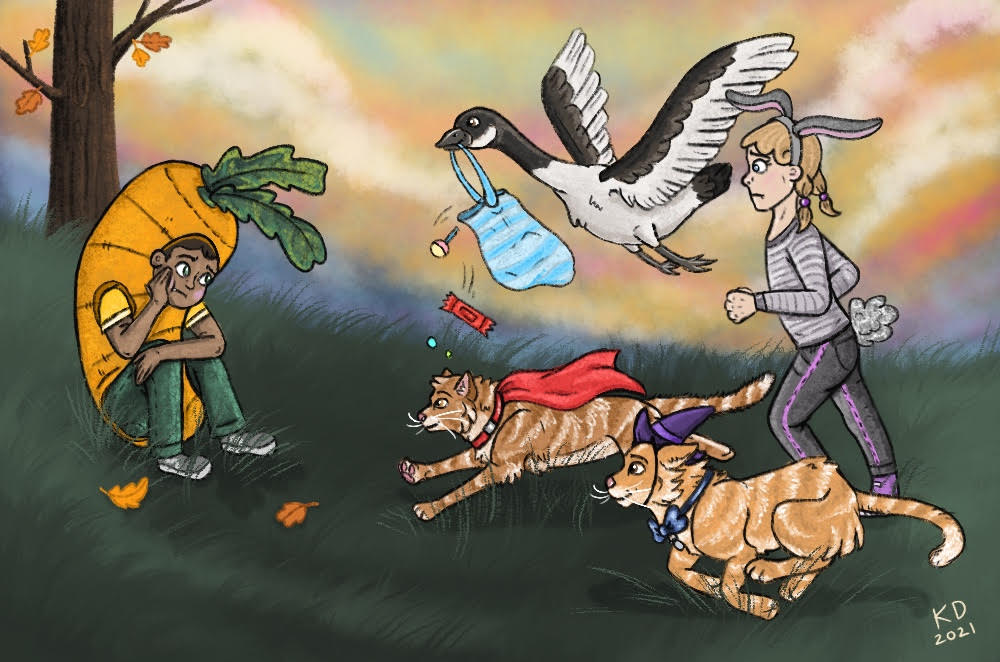 It’s Halloween, and Gary and Morris are getting ready to go for a walk around the community to take in the festivities. The two of them love seeing all the trick or treaters, the decorated homes, and the general spirit of the day.

Hervey Cats was no exception, the shelter was dressed up with numerous fun Halloween decorations and the two cats were poking around, sniffing and rubbing their faces on things.

“Halloween really brings the creativity out in people, doesn’t it?” said Morris.

“It really does,” said Gary. “Marjorie went all out this year.”

“You’re not kidding,” said Morris. “I am so excited; I just love this time of year.”

“Same here!” said Gary. “I love the smell of chimneys, the falling leaves, all the kids in costumes. It just feels like Halloween.”

“First, we’re going to visit the local animals to see what they are up to, then we’re going to see the big show – the human Trick-or-Treaters,” said Gary.

Both cats, not wanting to be outdone, donned their outfits, as provided by a member of the Hervey Cats team.

Morris was wearing a witch’s hat, and Gary had a small cape on a break-away collar.

Both cats showed off their Halloween accessories to the people at the shelter then went outside to go check on the local wildlife. They headed down into the valley and started calling out the names of their friends. But heard nothing in return.

Gary and Morris went over to the Skunk family’s den to say hi, but they weren’t there! Morris ran over to wear the prairie dogs burrow and called down into their network of tunnels. Still nothing.

“Where is everyone?” said Gary.

“Maybe they are afraid of my hat,” said Morris.

The two cats went over to the wooded area and started calling out for everyone. The owl, the geese, the ducks, the rabbits, the deer, the foxes and more!

“What is going on?” said Gary.

“This is strange,” said Morris.

Suddenly they heard a screech from the owl, but it was distant!

Both cats bolted as quickly as possible in the direction of the watering hole.

When they got to the clearing, they saw that everyone was there! The entire population of local wildlife was hanging out around, and in, the water. They were also dressed up in their own homemade costumes, which gave Morris an idea.

“We should jump out and scare them,” he said.

The cats climbed a small tree and once things quieted down a bit, they both jumped down to the ground letting out a big howl.

The animals all jump back.

“My goodness!” said the deer.

“I cannot believe you could be so irresponsible!” said the leader of the geese. “We have a tiny human here in peril! And you two jump out of the forest giving them a scare?!”

“What are you talking about?” said Morris.

Both cats looked over to where the geese were pointing, only to find a young human that looked like a sad carrot.

The lead goose told them the human dressed as a carrot had been having a hard time with some other humans, dressed like skeletons, who had taken their candy.

Gary and Morris went over to the young human and rubbed their sides on him. They lay down on the ground next to him. He told them about how he was being bullied and the two kids dressed as skeletons had stolen his candy. The cats felt bad for him.

“We should do something for him,” said Gary.

“I wish he could understand us,” said Morris.

“He doesn’t have to,” said Gary. “Let’s go find those kids in skeleton costumes.”

The cats, with the lead goose in tow, walked out into the town. There were kids everywhere -shouting, laughing, and having fun. All of them were in their costumes and the lights and home decorations were a sight to behold.

“How will we find these kids?” said Morris.

“We need to find a group of skeletons, who also have a bunch of candy near them, who are slightly older than the sad human,” said Gary.

“Right. Well, we had better get to work,” said Morris.

“To the trees!” said the goose.

All three animals climbed/flew up into a tree and hung out watching the kids go by. Suddenly they heard a yell.

“Give us your candy!” said a pair of skeletons.

“No!” said a defiant young child.

The two skeletons grabbed the bag and wrenched it away from the kid. Once they had it free, they took off running.

Both cats and the goose followed the skeleton pair and saw them head to a park bench. The robbers both sat down and dumped all the candy into one big bag they were carrying.

“I can’t believe all those silly kids did all the hard work for us!” said one of the skeletons.

“All we had to do is wait long enough for them to collect their candy, then we move in and steal it!” said the other.

Gary, Morris, and the goose came up with a plan. Both cats would come flying out of the tree and land on the humans, distracting them, while the goose would grab the candy bag and take off into the air with it. All three would meet back at the watering hole.

With a quick countdown, their plan went off without a hitch. Gary and Morris had drawn the two kids away from the stolen candy, long enough for the goose to sweep it up and head into the sky. Once that had happened, the cats took off running as fast as they could.

Gary and Morris were heading back the way they came when they saw the child who’d just lost their candy sitting on the curb. They nudged them and nudged them until they started to follow them. Back at the watering hole, the goose had landed back with the other animals and they were unloading the bag of stolen candy.

The carrot-costumed child had recovered his candy just as he saw the other victim of the skeleton bandits. Their sad face told them everything they needed, and they split all the candy into two groups, letting the other child choose first which one they wanted.

After that, Gary, Morris, the wildlife, and both children had a great time hanging out near the watering hole until the time came for them to go home. The animals were happy to help out their new young human friends, and they felt as if they got to see it all this year.

“I didn’t expect to save the day, I was looking forward to a nice relaxing evening, but helping out someone else is always worth it,” said Morris.

“Halloween should be a fun time for everyone, there is plenty to go around and no reason for someone to go without,” said Gary.