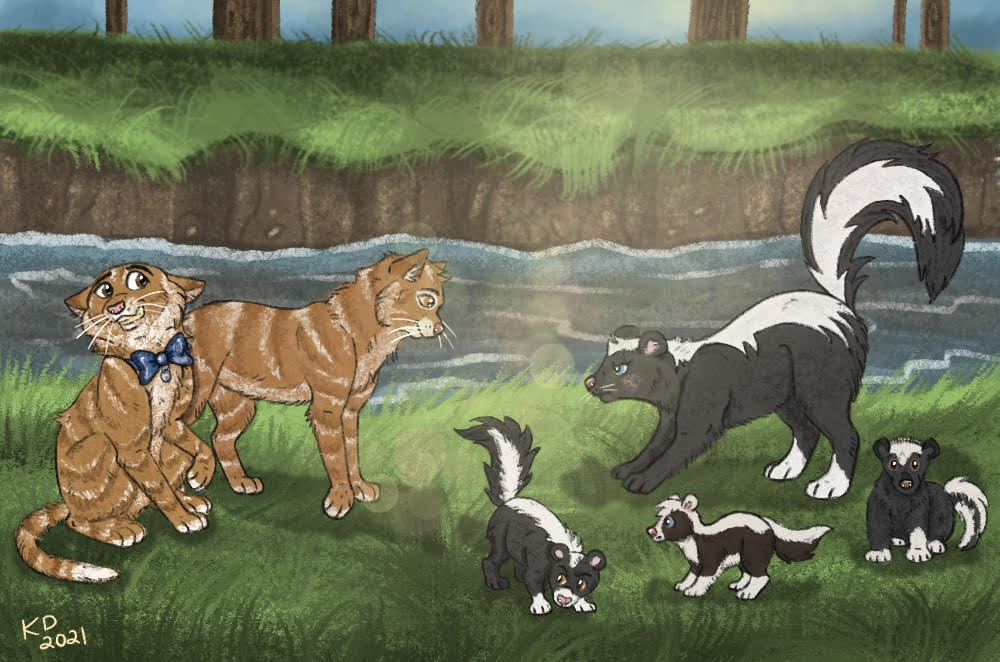 Gary and Morris Meet the Skunks!

Being the only cat allowed to go outside on the acreage (outside of the cat runs), Gary is somewhat of an ambassador for Hervey Cats to the surrounding wildlife, and today was no different!

It was a sunny day at Hervey Cats, and Gary had just received some great news! His friend Morris was taking a break from showbiz to spend some time on the acreage – a chance to be around friends and get back to normal life. Life on the road is hard work, for people and cats, and Morris needed a nice break.

It all started in the morning. Morris and his owner had just shown up and while the humans were talking Gary and Morris rubbed their noses together and started to chat.

“I’m so excited to spend the next few weeks with you here, Gary!” said Morris.

“Well, the feeling is mutual,” said Gary. “We have so many activities to do! There’s a bunch of places down in the ravine I want to explore, but I thought it would be better to wait until I had a buddy.”

The two cats spent some time rubbing up against the legs of their humans until Morris’ family said their goodbyes and hit the road.

“So how did this all come about anyway?” said Gary.

“You mean my vacation?”

“Normally my humans would never leave me alone for this long, but they have some family trip they are going on in a place called Europe, and they know how much I love being here. It made the most sense.”

Gary nodded and the two cats started walking into the backyard. They brushed up against the cat runs and sniffed some of the other cats. Morris caught up with a few old friends then he and Gary headed off towards the ravine.

The trip to the ravine is full of curiosities. The acreage is home to wildlife of all sorts, from tiny little mice to porcupines, to big deer and even a moose! On their walk down, Gary and Morris stopped to sniff the wildflowers, they hid in the tall grass and pounced at each other. It was a blast!

“This sure beats spending the day in a studio,” said Morris.

“What about all the treats and extra attention?”

“It’s nice, but it just doesn’t feel… natural? I don’t know. I much prefer being out here with friends than spending all day with humans.”

Just then they approached the edge of the ravine. Both cats peered down to see where they were headed.

“We can get down there easy!” said Morris.

Both cats jumped from ledge to ledge, carefully placing their paws in front of them, testing the ground to make sure it was stable, then moving to the next spot.

Once they reached the bottom, both cats split up and started investigating different areas – sniffing away at everything that moves – grass, flowers, insects and more.

Suddenly Morris’ ear perked up as he heard wrestling.

Gary craned his ears in the same direction as Morris’, like little satellite dishes picking up sound signals from outer space.

In an instant, they took off running. Bounding over rocks, puddles and through all that tall grass. Almost as quickly as they started running, they arrived at the mystery sound.

It was a bunch of skunks! Babies! They were rolling around and wrestling with each other.

“What are these things?” said Morris.

“You’ve been working too much,” said Gary. “These are little baby skunks!”

“They look like squirrels who were invited to a formal event.”

“I wonder where their parents are?” said Gary.

Gary and Morris didn’t want to scare the babies, so they didn’t introduce themselves, but they did start looking around to see if they could find their parents.

Both cats looked high and low, trying to keep some distance between them and the babies, but they couldn’t find anyone. That is until Morris slipped on some loose dirt and tumbled down from the side of the ravine and landed in between the wrestling babies.

It was too late though, and all the babies, in unison, started shrieking.

Like a moth to a light, Mama Skunk appeared on the scene.

Morris started to slink backwards while apologizing. Hearing all the commotion, Gary ran over to see what was going on.

Mama Skunk started to show some aggression, not knowing that Gary and Morris were friendly. In her mind, a cat is an efficient and terrifying predator not just for her, but for her babies too. Morris was hissing a bit to keep her at a distance, but Gary was curious.

They stood there, aghast, and couldn’t believe what they were seeing. Gary kept walking towards the skunk. What they didn’t know was what he was saying while doing so.

“We are friends!” said Gary. “We are not here to hurt you! We saw your babies and went to go find you – we were scared they were lost!”

The mama skunk was apprehensive. She didn’t know whether to trust the cats or not, but Gary was moving slowly, and in her experience, cats did not do that often.

Gary practically slowed down to a cinematic version of slow motion, made it over to the mom and tried to rub noses with her. At first, she jolted backwards, but then the two got a good sniff in and the tense situation began to change to a calmer one.

“My husband will never believe this,” said Mama Skunk.

“I’m Gary. This is Morris. We are from the big acreage just at the top of the ravine. We live here, well, I do. Morris is my friend and he’s staying here for a few weeks.”

“Yes. That’s right,” said Morris. “We honestly didn’t mean to scare you or your babies. We are very sorry.”

Meanwhile, the humans standing on the edge of the ravine were absolutely stunned. They couldn’t believe their eyes. The cats were getting along with the skunks! One human sarcastically noted they were about to have a heart attack when they saw Gary trying to go rub noses with a skunk, especially in the presence of the babies.

Gary and Morris gave their best wishes to the skunk family, and they offered to bring some food back for them later in the day. Mama Skunk thanked them and headed out the other direction, babies in tow.

Both cats started to make their way back up the ravine to the humans, who were calling their names and slapping their thighs – for reasons Gary and Morris can never understand.

Once back up top, the humans picked up both cats and snuggled them. They expressed how happy they were that the skunk didn’t spray them, and they all went back inside for some treats.

“Not a bad afternoon,” said Morris.

“Not at all,” said Gary. “Though with how bad you smell, you’d think you did get sprayed.”

“Oh, come on. I fell in some old puddle water.”

“Follow me. We can tip over the rain barrel, so you don’t have to lick it all off.”

They both laughed and called it a day.