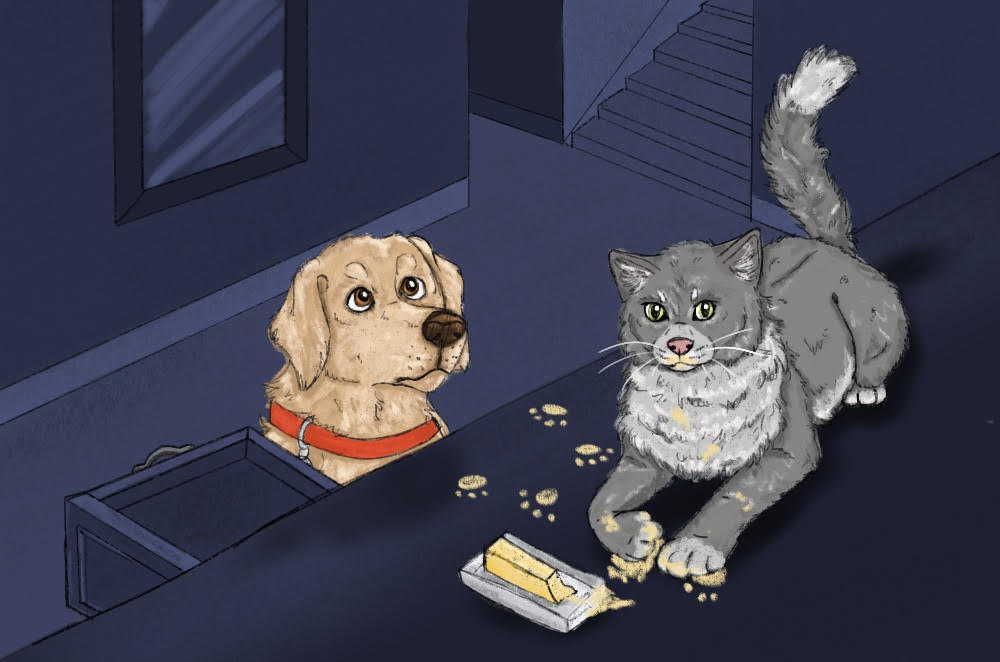 It’s dark out. The moon hangs high in the sky and the humans are sleeping. After lulling them into a false sense of security, they’ve fallen into a deep sleep. Suddenly a leg comes out of nowhere and my space at the foot of the bed is compromised. It is now when my mission begins.

Getting to the floor is easy when you are as light and agile as I am. Starting with my two front paws, I gently touch down onto the soft carpet and trot as lightly as possible to the bedroom door.

It’s dark inside the house, but out of the corner of my eye there is movement. It’s the dog! He’s sleeping in the hallway and just rolled over onto a paper bag the humans left on the floor. The noise cuts through the air like a blade and my fears are confirmed. He woke up the humans.

I feel their footsteps through the floor, one of them comes into the hallway and I freeze. He walks straight to the bathroom, turns on the light, and immediately groans. He sounds like the dog when he yawns but accidentally barks at the same time. The door shuts and I move behind the dog.

There is a great rush of water and out walks the human, from the bathroom, and then off into the bedroom. I give the dog a growl and make my way down the hall.

The living room looks like a jungle. The tiny humans spend all day here making a mess. I slip past all the toys, jump on top of the coffee table, knocking a plastic cup to the floor. From there, I leap across to the computer desk, and then the windowsill. The humans left the window open and the cold winter air feels nice against my fur. I could spend all night watching the cars go by, but there are more important things right now.

As I stand up and walk over to the desk again, my tail knocks over a jar of pens and they spill all over the floor. There are footsteps. Human footsteps. I dart underneath the couch just as the light comes on. Another massive groan comes out of their mouth as they wince at the light.

They look around, walk over to the pens, pick them up, then walk back towards the light switch. As they do, they step on a piece of Lego and make a noise similar to the one when the lights came on, but much louder. They hop on one leg and grab the Lego-ridden foot. The lights go off again as they saunter down the hall.

The space beneath the couch is nice. This is another spot I could spend the rest of the night. Once you crawl under the slim open space between it and the floor, it all opens up. Inside the couch frame you can scratch your claws on the wood or climb up and sleep without touching the floor. Alas, I have a mission, and I must continue on.

After squeezing out from under the couch, my eyes focus on the kitchen. I can now see my prize, glistening in the moonlight, sitting atop the counters.

There are a couple of ways to get up there, but most of them rely on the humans leaving chairs or stools close to the counters. There is one guaranteed way, but it takes time and I need help from the dog.

About a year ago, the dog finally made himself useful and learned how to open the drawers below the countertops. By doing so, he can make a platform for me to jump on that’s just the right height get onto the counters.

As I walk into the kitchen, I realize there are no chairs or stools nearby. Why would the humans clean this room and not the living room? Either way, my night just got more difficult. I mosey over to the dog and gently tap him in the face about five or six times. He wakes up in a mood.

I motion to the dog and walk to the counters. He knows exactly what’s going on. We’ve been doing this for a while. The only downside to involving him is having to split the loot. Half is better than zero, so we move on.

The dog pulls out the middle drawer, I jump up immediately, and in seconds Im on the counters. The humans cleaned up so there aren’t any treats sticking to the surface. Oh well, the real prize is only a few steps away. Beautiful, yellow, salty, sweet, and the best tasting thing in the house. A tray of butter.

It looks like the humans forgot to put a lid on the butter dish tonight, so I run over and immediately start licking it. I can’t stop myself. It’s so delicious I feel chills all over my body. In this moment, only the butter and myself exist in the entire universe!

I hear the dog whining. At first, I don’t care, but then I remember the humans. If he wakes them up, this is all over – possibly forever. I move the tray to the edge of the counter and knock it down.

We finish the butter and decide to hide the tray in the kids toybox. The humans won’t find it for ages, and when they do, it’ll be a mystery. They might think it was the kid, but the dog and I know the truth. If anything, we did them a favour. When the dog isn’t involved, I just lick the butter until I’m full and they use it the next morning.