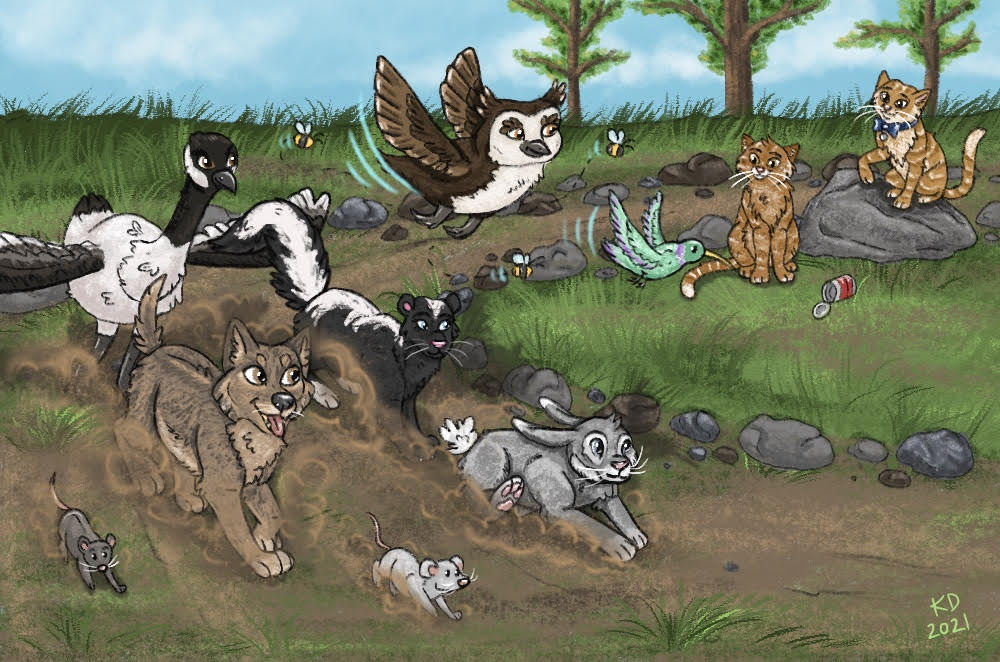 Gary and Morris were hanging outside the front door at Hervey Cats, basking in the sun when they saw two young humans running towards the shelter.

“I win!” shouted one of the children.

Garry and Morris looked at each other, nodded, and said, “We should have a big race!” at the same time.

Both cats jumped up and started chatting with each other about their plan.

“We should go around and talk to the local animals to see if they want to join in. We could make it into a big event,” said Morris.

“I love it. And we can give away a prize… but what should it be?” said Gary.

“Well, it should be a nice delicious snack. Maybe we could sneak some snacks out of the building and give them to the winners,” said Morris.

“And if I win, we don’t have to sneak anything out, I can just jump up on the counter and eat,” said Gary.

“Well, that’s not fair to the competitors,” said Morris.

“Well, they are turning up for an event, for a chance to win a prize, from us, and if we end up winning it, they will feel negative about it afterwards.”

“Oh… okay. I think I understand. So, we should run the event, but we don’t need to participate.”

“Well, we can,” said Morris. “But I don’t think it would be right for us to win it. Maybe organizing things would be enough for us.”

“Yeah, I hear that. Let’s go figure out a course and spread the word!”

Both cats headed outside to make a course.

“If this is going to work, the track needs to have obvious markers,” said Gary.

“What can we use?” said Morris.

“There are a bunch of rocks down in the valley, but we might need help getting them up here,” said Gary.

Both cats sat and pondered how to get the rocks up to the field and came up with a plan. The Canada Geese were back hanging around the area, and they knew how militant they are.

“What if we asked the geese? They look like they are pretty bored right now.”

Gary and Morris set off to talk to the geese. After arriving in the area, they were suddenly greeted by a stern voice.

“Halt! What brings you to our perimeter?” said the leader of the geese.

“Hey, guys! Do you remember us? We are the cats who work nearby at the shelter,” said Gary.

“We need your help,” said Morris.

“Look, we know things haven’t always been great between birds and cats, but you are big and strong, and we pose no threat to your flock,” said Morris.

“And to be honest, it looks like you and your fellow birds don’t have much going on right now,” said Gary.

“We don’t mean it as an insult,” said Gary. “We are planning a race for local wildlife and need help moving some rocks up from the valley to build the course.”

“A race eh? Hm… Well, we could use a little exercise, and a race sounds like a fun time. Let’s do it,” said the goose.

“Great! We will head down to the valley and stand near the rocks we want to move, if your birds can come down, scoop them up and carry them to the course we are working on, that’d be great!”

“We will see you down there,” said the goose. He then turned to the rest of the flock, let out a few loud honks, and all the birds suddenly lifted into the air and flew into the gorge.

Gary and Morris were running as fast as they could to get down to the area with the rocks.

“I can’t believe it worked! They’re going to help us!” said Morris.

“I can’t either,” said Gary. “They aren’t usually very helpful.”

The cats made it down to the stones where the geese were sitting, pecking at the ground here and there.

The geese each grabbed a stone, flapped their large majestic wings as quickly as possible then made their way back up the valley to the Hervey Cats property.

“Where do these need to go?” said the leader of the geese.

“Follow us and drop one on each side of us whenever we stop. That way we can set up a course that’s easy to follow,” said Gary.

After a few honks from their leader, the geese took turns following the cats, two at a time, and dropping rocks on either side of them whenever a cat would stop. After a short period, there was a complete track outline, wide enough for several animals to race side-by-side if it came down to it.

Both cats went to thank the geese and as they approached the leader before they could say anything, he thanked them!

“Thank you two so much,” he said. “My flock has had nothing much to do for the last few days and discipline was lacking. This brought them back to reality. Being a goose is hard work and if we take a break, we fall behind.”

“Well, we are very happy you were able to help,” said Morris.

“Since it is a race, would you be open to letting my flock participate?”

“I think it would be a shame to exclude anyone from this race, but geese are certainly quick animals. Perhaps if your flock agreed to stay close to the ground it might feel a bit fairer to the rest of the racers.”

“Done,” said the head goose, who waddled back to his flock.

“Now we need to spread the word,” said Gary.

Both cats ‘beat the bushes’ to find every animal living nearby. Whether it was a vole, a mouse, a groundhog, other birds, the family of skunks they recently met, and more.

By about 4:30 pm, all the animals were ready to race. There was at least one representative from all the local wildlife, and while the mice were nervous about the owl, both cats ensured everyone there would be no problems.

It was at this time that one of the volunteers from Hervey Cats noticed what was going on. There was a proverbial Noah’s Ark of local wildlife in their backyard, all standing in a line, and seemingly interacting with each other. Gary and Morris stood to the side and were keeping tabs on everyone.

The volunteer called a few people and went outside, and one of them noticed what was going on.

“I think they are going to race… but how… did this happen?”

Gary went over to the volunteer, rubbed up on their legs, then stared at them and walked back to the group, human in tow.

Morris jumped up on a big stone, and in front of him was an old tin can.

“When I knock the can off the stone, the race begins! We are doing three laps of the course, and the winner will receive a tasty prize!”

“And don’t forget to be good to each other,” said Gary. “Any cheating in the race will not be tolerated. Animals with wings must stay low to the ground and everyone else has to use their feet!”

The animals let out a noise, all in unison, which caught the volunteer off guard.

“What is happening?” they said.

Suddenly, Morris punched the can, it hit the ground, and the race had begun.

The volunteer saw the animals take off and joined in right behind them.

“Not quick enough to beat the natural world,” said Morris.

The geese swept down low to the ground, the mice were scurrying, and the skunks were wobbling faster than they’d ever wobbled before. There were also other cats, a wolf pup, some honeybees and a host of other local wildlife. Sadly, for the volunteer, they weren’t able to keep pace with the animals, but they sure were trying!

After the first lap, the wolf pup was out front, but then suddenly the owl caught up and passed him. After another lap, the owl was no longer leading, but one of the mice! On the final lap, a Canada goose had swept back into first, but ended up taking a turn too wide and crashed into a tree. They weren’t hurt, but they weren’t in the lead anymore.

Morris and Gary stood at the finish line. Then, moving as fast as birdly possible, was a tiny Hummingbird with a giant rabbit right behind him. Both were giving it everything they had, and it was a photo finish!

The tiny hummingbird had won, and the rabbit came in second place, with the owl in third. As they were celebrating, a groundhog poked its head up about 20 feet away from the track. Apparently, he thought he was following the course underground but forgot the layout.

Gary and Morris went back inside and grabbed some treats for the winners. The rest of the animals looked tired and hungry and both cats knew what they had to do. So, they went back inside the shelter with the volunteer and led them to the food storage closet. The volunteer grabbed a bag and brought it outside, pouring small piles of food around the animals. Everyone chowed down and had a great afternoon. The hummingbird, the winner, was sipping Koolaid from a little dish set up by the volunteer.

At the end of the day, the leader from the Canada geese came back to congratulate and thank Gary and Morris for the afternoon.

“It may sound strange, but because we work so hard as a species, we Canada Geese don’t get to have much fun. But this… this was very fun. Thank you both for including my flock and making such a wonderful day for everyone. Our bellies are full, and our minds are still racing.”

Gary and Morris both thanked the goose.

“Take care you two! I am sure we will meet again. And as for that hummingbird, with that speed, we might have a job for him as a forward scout.”

“You take care,” said Morris. “We will meet again for sure!”

“What a race!” said Morris.