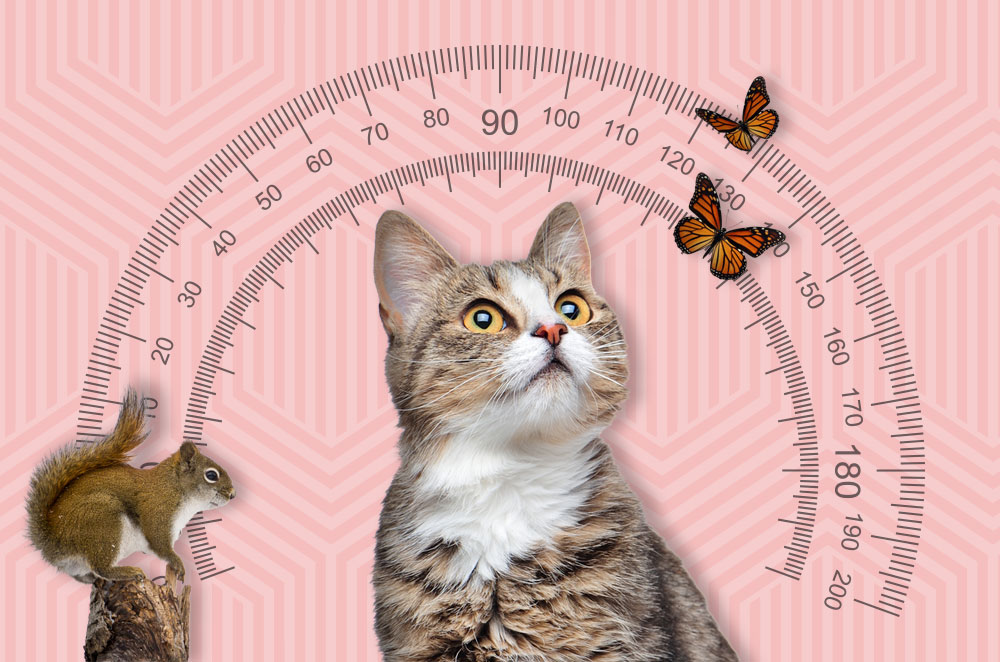 Through the Eyes, Ears, Nose, Paws, and Tongue – Your Cat’s Incredible Senses

Cats are equipped with an enhanced set of tools to amplify their senses – making them incredible hunters and survivalists. It’s hard for us to imagine having such amazing senses, but in some cases, it is probably for the best. Cats and humans live very different lives, and while it might be interesting to be able to hear at a great distance, we might not always want an amplified sense of smell.

Cats are born with small satellite dishes on both sides of their head. These help them gather sounds from all different directions and actually identify where those sounds are coming from. How do they accomplish this? These little dishes can pivot up to 180 degrees thanks to more than 30 different muscles in their ears (where humans have 18).

Additionally, while the old cliché of a dog being able to hear any high-pitched sound a human cannot (which is many cases is true), cats can actually hear more than a dog. Dogs can detect between 67hz to 45,000hz, while cats can detect 45hz to 64,000hz.

Sight is tricky with cats. While some elements of their sight are enhanced, other parts are less so. Cats’ eyes are fine-tuned to help them hunt, and especially at night. An enhanced field of vision (the average human field of vision is 180 degrees while cats have 200 degrees) lets them see in widescreen. Their ability to detect the smallest of movements lets them pounce on nearby prey and they can detect UV light, which helps them hunt at night.

The one element of a cat’s eyesight that lags behind is distance. Cats often have good eyesight within 20 feet, however anything further than that is hard for them to focus on. For example, cats are able to see within that 20 feet with the same quality of what a human would see within 200 feet.

While dogs tend to get most of the credit for a strong sense of smell, cats also use their sense of smell as their primary means of identifying people and objects. Dogs do actually win the award for the stronger sense of smell, but cats are equipped with numerous tools enhancing their sense. Unlike most animals, cats have what is known as a ‘second nose’ in the roof of their mouth. This is known as the vomeronasal organ and it can pick up pheromone signatures and other scents that typically go unnoticed by humans.

Compared to humans, who have roughly 5 million odor-sensitive cells, cats have 200 million. This greatly increases their ability to detect unique smells, the directions from where they come and most impressively, they can trace a scent from up to a mile away. Cats also use their scents to identify other cats. When you see a cat rub their face or body against your furniture, they are leaving their scent behind as a marker. When another cat encounters the furniture, they will detect another cat is nearby and they may have ventured into their territory.

The whiskers of a cat are one of their most celebrated traits. What function do these whiskers offer? They are like a radar for a cat entering a space. Because a cat has a compressable ribcage, when they are sizing up the space below a couch, or a smaller entry point, the whiskers help them determine if they will fit. If the whiskers are pressed too far down when they insert their head, they will rethink entering that spot.

Cats are also very sensual creatures. While not all cats are cuddly, many of them are and find great comfort in being pet, cuddled, or getting a nice belly rub. How do you get a cuddly cat? Sometimes it’s a roll of the dice to determine their personality, however a large percentage of cats will often open up their trust if they live in a calm and caring home.

Is your young cat not cuddly? That doesn’t necessarily mean they always will be. As cats age, much like humans, they slow down and many just want to spend time with family. Treat them with love and care and you will see it returned.

If you are a food connoisseur, be thankful you are not a cat. Most cat senses are enhanced, but they drew the short straw when it comes to taste. On average, a cat has only 473 tastebuds as opposed to the roughly 9,000 found in humans. Cats use their sense of smell, for the most part, to identify a good meal.

Cats are famous for grooming themselves with their tongues and a reduced sense of taste likely is very helpful with this work.

For the most part, your little housecat has access to abilities that many would consider superhuman if they existed in another person. They are almost like miniature superheroes. With all this in mind, try to remember how these affect the way they interpret their environment so you can give them the best life possible.