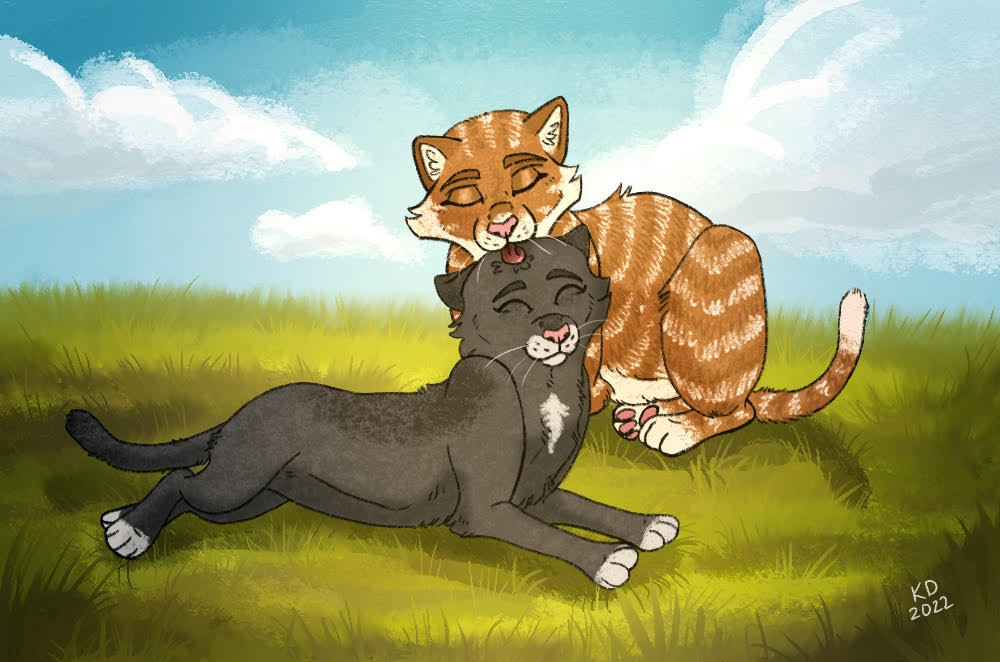 If you’ve owned more than one cat, there is a strong possibility you’ve encountered this scene. Two or more of your cats are lying down together, seemingly lovingly, licking each other all over the head and neck. While it may warm your heart to see your two feline friends being so friendly, you may also find yourself asking, “Why are they doing this?”

Allogrooming is the term given to group grooming by the science community. It’s also known as social grooming, and can be found in most social animals, including house cats, big cats, primates, and more!

On the surface, allogrooming may seem like an act of affection, but it might not be that simple. For some animals, it may be born of necessity, but there are some clear indicators they still enjoy it! Take, for example, housecats. When they get together for social grooming, they often present the tops of their heads and necks. These are areas they are unable to reach on their own and are now relying on other cats to help them with. While doing so, they frequently can be found purring away, enjoying their little bath!

What the Research Says

A 2004 University of Georgia study titled Social organization in the cat: a modern understanding, was conducted by observing free-roaming cat colonies and their behaviours. It was noted that cats who were part of a colony would engage in acts of allogrooming, but not with counterparts outside the colony. This means they only groom other cats they know and trust. This makes sense. We wouldn’t ask a stranger to give us a bath!

Researchers also found that recipients of the grooming would tilt or rotate their heads to present specific areas to the other cats, usually while purring! This led them to believe there was a practical element to allogrooming, as the areas the cats would present for grooming were usually those they could not reach themselves.

Trust plays a major factor. Cats who are related or of the same litter may social groom with each other well into adulthood if they are not separated. This seems to be more an act of trust than just a simple behaviour of the species. Cats are not going to go out and groom another cat they just met; they are likely to hiss at them instead.

Have you noticed how cats like to be pet on the head and neck? Noticing a pattern here? The head and neck are places our cats present to other cats they trust to help them groom. In doing the same thing with us, our cats might see our petting motion, albeit with a giant hand instead of a small cat tongue, as us allogrooming with them. The petting of the head and neck generates purring, much like when they groom with friends. Who is to say we are not just helping them groom too?

Another study from the University of Southampton found that higher-ranking cats in the colony groomed lower-ranking cats more often than the other way around. The ones doing the grooming usually took higher postures while the groomees would typically sit or lay down.

Researchers also found that groomers would be more prone to aggression afterward. They interpreted this, paired with social grooming, as their attempt to show dominance in a situation where outward aggression would be too costly. These are colony group dynamics and might not be the same in a household with two or three cats.

If your cats are grooming each other at home, it likely just means they are great friends! Allogrooming is usually an act of trust unless a dominant cat is attempting to flex their power on another. The likelihood, however, is they’re just helping each other out and showing their friendship all at the same time!