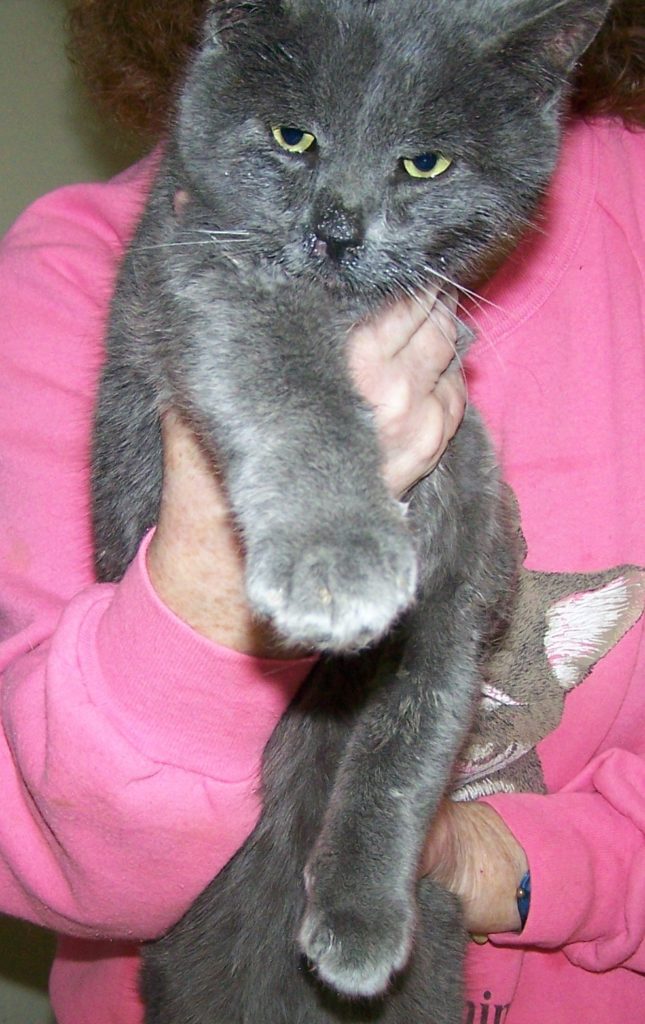 Hi! My name is Wylie. I am named after Wylie coyote. Why? Because I almost became his dinner one night! Here’s how it happened….

Because my previous owner did not want me anymore, I was abandoned and dropped off at an acreage subdivision north of Spruce Grove. How does everyone know I was abandoned? Well, in the beginning, I had a beautiful coat, and good weight and was very friendly. But the people in this subdivision where I was left have so many cats dumped off there that most of them have a policy of not feeding or helping the strays. I went from door to door, hoping for help, but was always chased away, and after a week I was so cold, hungry and exhausted that I thought I was going to die. Still, I knew that I needed to try again. There was one place that I had not been to, so I approached the house. I was so cold and hungry and thirsty. The people saw me and came out right away-but this time, not to chase me away, but to pet me and give me food and water and, although they did not take me in right away, they provided a bed for me. Every morning and night they came out and fed me and petted me.

Then, a couple days later, while I was out looking around, there was the coyote! I turned and ran for my new home, but he got me! I fought valiantly. I did not want to die! How could my owner have done this to me?

I managed, somehow, to get away and went back to the house with the nice people and crawled into my bed and stayed there until they came home. They fed me and petted me and then noticed my tail. It was chewed, and broken in many places, and had now frozen stiff in the cold weather. These people were horrified at what had happened and began to phone around to vets and places for help for me but, unless you had a lot of money, no one would help. The nice people were told to leave me to die. My tail was now infected. Finally, someone told these nice people about the Hervey Foundation for Cats, and when the nice people called, the lady there listened and agreed to take me. She knew the temperatures were dropping to -40 with the wind chill, and that heavy snowfall warnings were out. The nice people took me in, and put me in a spare bedroom so I could get warm and so they could take me to the Foundation. The storm hit and dumped so much snow that we were not sure if they could even get me to the vet. The nice people, despite the roads and impassable snow in places, still took me to the Foundation. The people at the Foundation had their van running, heated and waiting for me, and then they had to make a run for it out the drive way because it was drifted in. We got out the drive way but knew we would not get back in until the snow was blown. So off to the vet we went. The vet took me right away and looked at me and talked to the lady from the Foundation. I was to have surgery right away to amputate my tail. They neutered me at the same time and also gave me vaccines and a microchip and a week later I went home- but this time to the Foundation. It is warm there, with all kinds of food to eat and toys to play with, and people who love me. I am almost better now and love to play and enjoy the company of the other cats. She says that I am staying at Foundation because of what happened to me. I know I am a lucky one-there are so many others like me who don’t make it, or become someone else’s lunch.