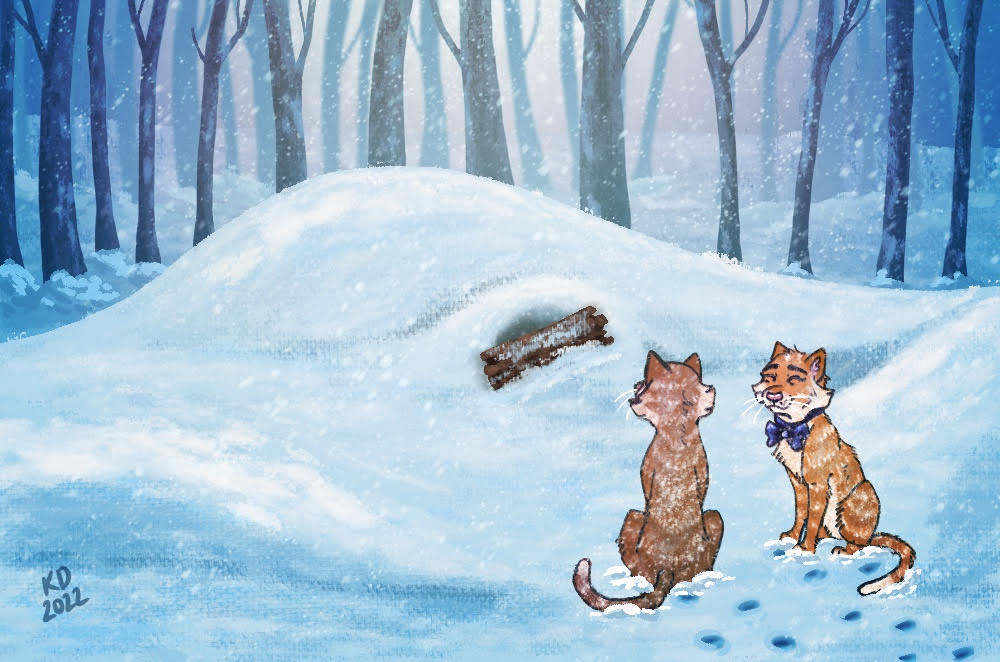 It was a brisk winter morning at the Hervey Cats shelter. The sun was out, but it was still cold. It was one of those days where you think you want to be outside, then you get out there and immediately change your mind. Cats know all about changing their minds, always wanting inside and outside all at the same time.

Gary and Morris had just got back inside for the third time that morning and Marjorie was now getting tired of letting them in and out so frequently.

“You cats are just going to have to use the cat door if you want out so badly! I am tired of opening and closing the human door!” she said.

Gary and Morris both looked at her and then ran off into the shelter. The two cats chased each other until they ran out of steam – which just so happened to be right by the cat door.

“That’s because this door goes right outside!” said Gary.

“I hate the winter!” said Morris.

“I want to be outside almost all the time, and every time I get outside, it’s too cold!”

“Yeah, it sure is windy out there,” said Gary.

“It sure is,” said Morris. “It wouldn’t be so bad if we didn’t have to deal with the wind.”

The two cats climbed up onto a cat tree and peered out the window. They saw people walking past the shelter in brightly coloured winter gear. Some with children, some without. The gentle blanket of white snow over everything made it seem peaceful and quiet. They felt both sets of their eyelids get heavy.

“You know something…” said Gary, who fell asleep as he was saying it.

Morris let out a loud snore.

Both cats lay there and napped while the warmth of the sun came through the windows and kept their bodies nice and hot.

About an hour later, Marjorie walked past them while carrying some boxes and one of the edges caught the doorframe. The cats bolted to their feet, coming alive in an instant!

“Sorry boys! You can go back to sleep now!” said Marjorie, as she continued walking in the direction she was headed.

“That scared me!” said Gary. “I’m probably not going to fall asleep now.”

“Neither will I,” said Morris, as he stretched out as long as he possibly could.

“Let’s see how cold it is outside now,” said Gary.

The cats walked over to the cat door and pushed through it to the outdoors. It wasn’t too cold outside on its own. Standing still, with the sun beaming down, they didn’t feel as if they were suffering.

Suddenly, a big gust of wind blew past and chilled both cats to the bone.

“Aaaaaaand that is enough for me,” said Morris. “I am going back inside.”

Gary turned to follow him, then paused for a moment.

“With what?” said Morris.

“How are we going to do that?” said Morris.

“We will find a way,” said Gary. “We have conquered far more difficult challenges.”

“Let’s head back inside and make a plan, though. I am very cold,” said Morris.

Both cats ran back to the cat door and found a comfy spot in the shelter. They plunked down onto the floor near a baseboard heater and started making a plan on how they would build their snow fort, who they would need help from, and what tools, if any, they might need.

“The drifts are high enough we could just dig!” said Morris.

“True, though we would likely need to pack it down firmly before that,” said Gary.

“Not too firm!” said Morris. “We don’t want to flatten the entire thing out!”

“True,” said Gary. “If we are looking for help, Bullwinkle may not be the right guy to ask!”

“He is so heavy he would flatten the snow back into the earth!” said Gary.

“Who should we actually get to help us then?” said Morris.

“Well, probably Terrance if he is around, he has the know-how,” said Gary.

“What about Kyle and some of the local prairie dogs?” said Morris.

“Great idea,” said Gary. “Those prairie dogs don’t hibernate so they should be up and about!”

The cats had their plan ready to go so they went outside and started rounding up their friends. Down by the partially frozen river, Terrance the beaver was fussing about his dam structure, moving logs from one side to the other.

Both cats walked up to the edge of the river.

“Careful!” shouted Terrance. “The ice is only along the edge of the bank, and it isn’t very deep.”

“I guess we had better watch our step!” said Gary.

Being the careful animals they were, Gary and Morris made sure to stand on the edge of the frozen mud.

“You two are lucky I like projects!” said Terrance. “I was just patching up my roof!”

Terrance jumped down to the ground from his dam and waddled over to the two cats.

“Great! On the way back we need to stop at the prairie dog mound,” said Gary. “We are going to get some help digging this thing out!”

The two cats and the beaver, a strange trio, made their way over to where the prairie dogs lived. Once they got to the primary entrance hole, they shouted deep into the ground for their friend Kyle.

Suddenly a tiny little rodent-shaped head popped out of the earth and began to chatter back.

“Hi everyone! It has been a long time!”

“Things are good, although a bit boring,” said Kyle. “There are quite a few of us down there without much to do! Lots of philosophical debates are breaking out and we could use a project.”

“We have the perfect thing for you and your friends!” said Gary.

“Indeed, we do. We are making a snow fort to get out of the wind, but still enjoy the outdoors!” said Morris.

Before they could finish explaining the task, Kyle and the other prairie dogs agreed to help and began filing out of their mound.

The group of them made their way back to the Hervey Cats shelter, both cats, a beaver, and a throng of prairie dogs. Once there, the cats and prairie dogs got to work.

Terrance used his tail to flatten out the snow in the space they wanted to build in, and once it was compacted enough, the prairie dogs started to dig one big hole into the cold snow. Behind them were both Gary and Morris, digging away at certain walls, widening paths, making deeper floors, etc.

Terrance used the warmth of his body and his waterproof fur to lean against the walls and slightly melt them. When they would freeze again, they’d form a thin layer of ice, reinforcing their sturdiness.

The fort was coming along! It consisted of a small tunnel and one big room. Inside the room were benches made of snow, a carpet one of the cats had found at the shelter, and a big piece of tree bark as a door! The prairie dogs had also drilled two small holes in the roof to allow sunlight in during the day so they wouldn’t be sitting in a cold, dark fort.

It seemed like the animals had all achieved their goal, and Gary and Morris decided they deserved to celebrate.

The two cats ran back into the shelter using the cat door and came back out with treats of all kinds; wet food, dry food, water, veggies for the prairie dogs, and woody stems for Terrance!

Everyone chowed down on their delicious feast and gave each other looks of respect and accomplishment. Once again, they had conquered mother nature as a group of friends from the local animal kingdom.

“I second that,” said Terrance. “For cats, you sure do a lot more than sleeping and hunting. Three cheers for Gary and Morris!”

The group of prairie dogs and Terrance gave three cheers to the cats, who sat there blushing.

“You folks are just about the best friends a pair of cats could ask for!” said Morris.

“Thanks for including us in the building of this fort!” said Kyle. “Would it be alright if we used it for community events this winter season?”

Gary and Morris looked at each other, then back at Kyle and nodded.

“We just needed a place to get out of the wind,” said Morris. “You can absolutely use it for you and your prairie dog friends.”

The cats gave hugs to the prairie dogs and Terrance, then everyone decided to part ways. It had been dark for a while already and was likely bedtime for a number of creatures!

They moved the bark doorway so everyone could leave and discovered it was snowing.

“I hope it doesn’t cover up our fort!” said Kyle.

The cats moved the door inside the fort and then everyone parted company.

Gary and Morris headed back inside the Hervey Cats shelter where Marjorie was putting some snacks out for the cats.

“Hello, boys! You had a long night outside. I wonder what you were up to?”

She placed a handful of snacks in front of each cat and then walked off to tend to the others.

Gary and Morris chowed down on the food and then passed out near one of the baseboard heaters where the warm air was in abundance.

In the morning the cats awoke and looked out one of the main floor windows. Their shelter had been snowed on quite a bit overnight, but just as they predicted, they could still see it!

After a quick breakfast and some self-grooming, the two cats ran outside to their fort. After a couple of minutes of digging, the new snow was out of the way and things were looking good once more. Both cats curled up on the rug and enjoyed the winter weather without the sharp winds!

Suddenly there was a knock at the door. It was Kyle.

“Morning boys! Mind if we join you?”

Kyle and about six other prairie dogs all piled in. Everyone was having a great time chatting and catching up with each other. It was a great morning – one that would repeat itself many times over the winter. The local animal kingdom now had a winter meeting place!