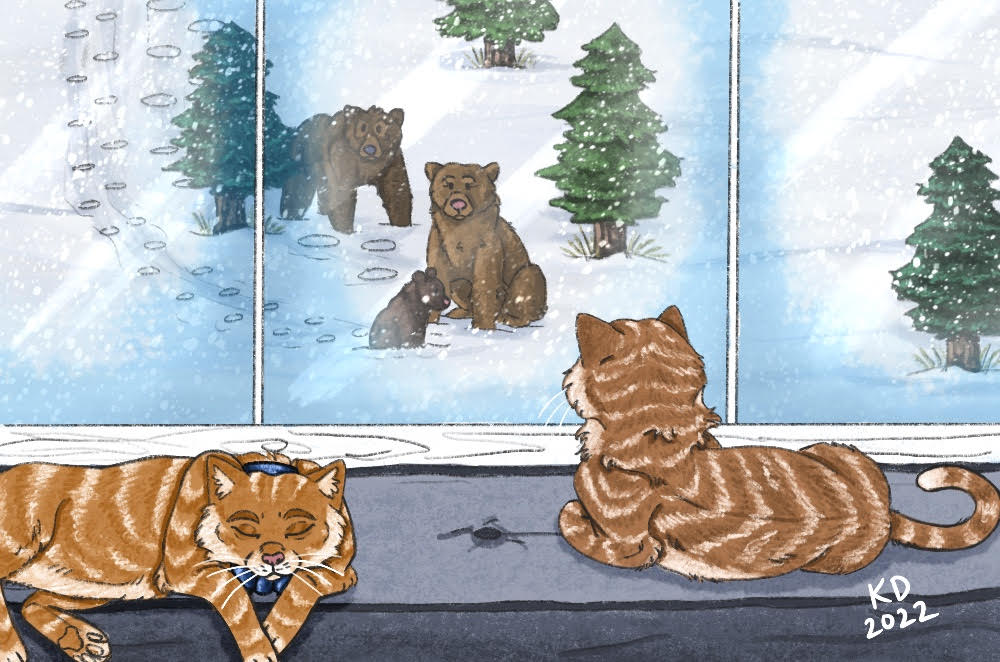 Gary and Morris Meet the Bears

It was a chilly day at the shelter. Winter had blown its cold breath the night before and with a fresh blanket of snow on the ground, temperatures were low outside. Gary and Morris woke up with the sunlight, gently stretching and licking their chops. Both cats got up, got through their grooming routine and then grabbed a bite to eat.

The two cats munched on kibble, getting a few words in between bites.

“What… do you think… we should do today?” said Gary.

“I’m going to sit… by the window… after I eat. I might even fall back asleep,” said Morris.

Both cats finished up their food, licked their paws to groom their faces, then headed back upstairs to hang out by one of the windows.

The sun felt nice and warm as the two cats sat there basking in the light. They drifted in and out of sleep, dreaming about running out in a big field, hanging out with their forest friends, and diving into a lake full of kibble.

Morris was completely asleep when Gary gently awoke and glanced out the window. There was something big and brown down by some of the trees in the back. Wait, there were multiple big brown things down there!

“There’s something really big out there!” Gary yelled.

“Well, what could it be?” asked Morris.

Gary jumped down to the floor and rocketed downstairs and out the cat door. Morris, half-asleep still, did his best to keep up.

As soon as both cats were outside, they stopped and looked at each other. It was COLD. Gary and Morris could feel they were only minutes away from shivering unless they started moving.

The cats darted through the snow and down towards the forest where Gary had seen the big brown things moving around.

When they got to the spot, however, there was nothing there!

“I wonder where they went?” said Gary.

“If I had to guess, I’d say they went that way,” said Morris, as he gestured towards what was very clearly a trail carved out by animals.

“Oh yeah!” said Gary. “Looks like something really big went through here. There’s even some dark fur left behind!”

Both cats ran up to the fur and took a sniff.

“I’m not familiar with this fur,” said Morris.

“That’s because you’re a city cat,” said Gary. “This smells like bear.”

“What is a bear?” said Morris.

Both cats followed the trail carved into the snow by the bears.

Once they got to the bush, Gary spotted them. It was a mama, papa, and a baby.

The cats ran over to them, but also approached with caution. Bears can be very dangerous if they want to.

“Hi there… bears. My name is Gary, and this is Morris.”

The bears looked at them and let out a gentle roar, as if to say, “Take it slow.”

“What brings you out this way?” said Gary. “Aren’t most of your kind sleeping right now?”

“Hibernating,” said the papa bear. “And yes, we typically are.”

“Our family was hibernating until our habitat got destroyed by these awful human machines,” said the mama. “We had set up a den in an area my family had used for years to hibernate, however, humans have moved into that area and built their structures over it. I think they destroyed our den to put more structures there.”

“Now we have nowhere to go,” said the papa bear. “We need a space that can fit the three of us for the next few months, and we need to gather some food.”

Both cats knew the land in this area like the back of their paws. They told the bears they would help them find a new den.

“You all start looking for food, we are going to find you a new place to call home for the winter!” said Gary.

The bears started looking for food while the cats darted off surveying the land.

“I know a few spots that might work out for them,” said Gary.

After inspecting a number of places, the cats returned to the bears and told them about their travels.

“Let’s go take a look at some of the places we found!” said Morris. “I think you’re going to like them!”

The first place the cats brought the bears to was a cave in the opening of a big rocky hill. It was filled with stone and had stone walls and floors.

“This place will fit us great,” said mama bear, “but it’s so cold and hard. I don’t think it will be comfortable for us to sleep in all winter.”

The animals all agreed with her and decided to move on to the next spot.

After a short walk, the cats brought the bear family to a space made mostly of fallen trees. There was a nice little space that could fit them, but the walls were primarily branches and the wind rustled through without much to stop it.

“This one seems a bit shaky,” said papa bear. “We need something a bit stronger to keep us safe.”

The cats decided to bring them to one last place, the last spot they discovered – a dirt cave on the edge of a very small cliff. The space was cosy, secure, had only one entrance, and the soft dirt floors felt nice on the paws.

“This is great!” said papa bear. “We just need to find more food.”

“We think we can help you with that,” said Gary.

“We recently set up a food stand with kibble,” said Morris. “We have to share with all the other animals, but there is plenty to help you get started.”

“We hope you can find enough to get through the winter!”

With that, the bears bid the cats adieu and started to make themselves comfortable in their new hibernating spot.

Gary and Morris ran over to the shelter and dragged a bag of food back for the bears.

“Have a great night, and I hope we don’t see you until the snow melts,” said Gary, with a laugh.

“We hope so too,” said mama bear. “We hope we can hibernate here all winter! In this great new space!”

Gary and Morris left the bag of food with the bears and went back to the shelter. It had been a long day for them!

“Boy, I am tired. Let’s grab a bite and go lay down by the window again,” said Morris.

“Sounds good to me,” said Gary.

Both cats ate and went back upstairs to their favourite window spot. They curled up into balls, then fell asleep, knowing they had helped a wonderful family who needed a hand.