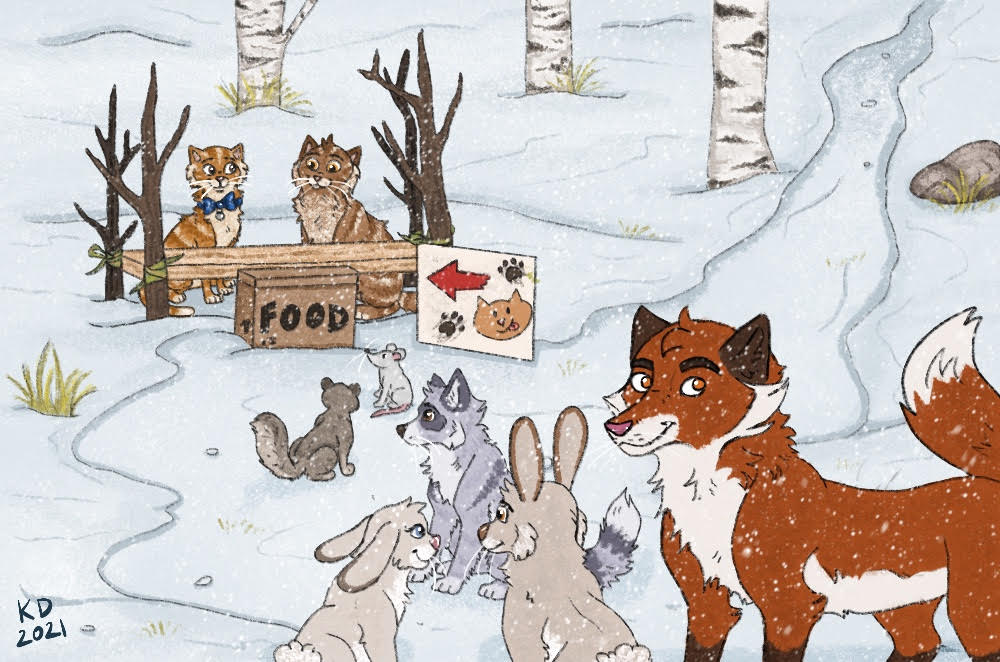 Winter is a tough time for the neighbours of Herveycats. Woodland creatures gather supplies all Summer and Autumn in the hopes they can collect enough to survive the Winter without needing to go out into the cold. It’s not just a hobby, it’s a way of life!

Gary and Morris were out for a walk around the Herveycats property one day when they ran into one of their squirrel friends, Eugene. They started to talk.

“So, basically, we work all day everyday leading up to Winter and when that rolls around, we just hope we found enough to carry us through,” said Eugene.

“Well, hang in there Eugene,” said Morris. “If you need some help, we are more than happy to oblige!”

“Thanks guys. You are the real deal,” said Eugene.

The two cats walked back to the shelter talking about Eugene.

“He really does work hard,” said Morris. “I wonder how we could help him.”

“Imagine having to work all Summer instead of enjoying the weather! It’s not fair,” said Gary.

The two cats got to the door of Herveycats and lay down on the ground.

“It’s starting to get cold. I wonder how much they have stored up down there,” said Gary.

“I don’t think that would be appropriate. I am not sure they will want to show the others how well they are doing,” said Gary.

“I don’t blame them,” said Morris. “I just want to make sure our friends will be okay.”

The two cats agreed there was a greater good at stake and set about the shelter to see if there was anything they could do. Just as they walked in the door, they overheard Marjorie, the founder of Herveycats, using the phone.

“It looks like they sent us double the food we ordered… Can you believe they just told us to keep it? Maybe we could donate some to another shelter.”

Gary and Morris realized in that moment what they needed to do. The shelter was sitting on extra food, and they wanted to make sure their friends had enough to get through the Winter. The plan was obvious.

“For the community!” said Morris.

The cats ran to the storage room and found the boxes of extra cat food. With a little bit of convincing, they pushed one of the boxes onto the floor, then dragged two small bags outside.

Once outside, they ran down to the woodlands to get some help from the racoons.

“Hey guys,” said Morris. “We need your thumbs to help us set up a food stand.”

“And you are welcome to have some, but first we need to set up a stand so we can store it and hand it out to the other animals,” said Gary.

The cats explained their plan to the racoons and three of them agreed to help. The animals started collecting sticks and branches, and thick blades of grass.

Using the materials, the racoons placed the wood down carefully and tied it all together with the grass. Once complete, the stand had a closable box for the food, a front counter for the cats, and a big sign to let the animals know where to go.

“All done!” said the racoons.

Gary and Morris handed the racoons some food, who happily ran off chirping and shoving the food in their mouths.

Morris leapt over the counter and the two cats booked it down to the woods. Once there, they started calling out to all their friends and let them know about the food stand.

“We aren’t saying you should stop collecting supplies, but if you run low, we can help!” said both cats. “We just want to make sure we have enough for everyone to last all Winter.”

The animals seemed excited but weren’t totally sure what the cats were talking about. These animals had collected food all their lives to store for the Winter, and if they went hungry, they had to search for food in the cold.

Gary and Morris told all the woodland creatures to follow them, and off they went.

Once back at the shelter, the two cats showed the animals their stand, how to find it, and how much food was stored inside it. As the meeting was going on, Marjorie came outside to meet a family.

She turned around and saw all the animals hanging out together, creating a symphony of sounds.

“What is going on here?” she said to Gary and Morris. “Is that the extra food? Clever idea boys.”

She saw the two cats sharing the food with the animals and figured she’d put aside a few extra bags to help provide for the local wildlife.

“You two cats are amazing,” she said. “I’ve reserved more food for your friends.”

“What’d she say?” said one of the rabbits.

“She just promised us more food for the rest of the Winter!” said Gary.

“Yes! So anytime you need, drop on by,” said Morris.

The two cats were pleased they were able to help their friends, but moreover, their friends were happy they could relax and start to enjoy the Autumn instead of frantically searching for food. 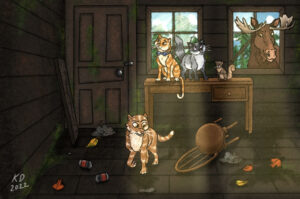 It was a lukewarm summer day in Alberta. A reprieve from the hot sun as of late. Gary and Morris were taking advantage of the 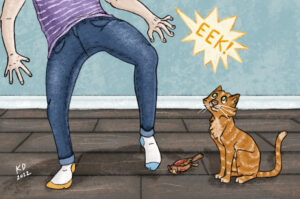 Why Do Cats Give Gifts?

Giving gifts isn’t just an activity relegated to the human world. If you think about it, animals are thoughtful creatures who regularly help each other 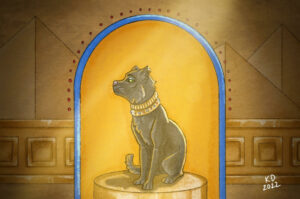 It’s no secret cats were held in high regard in ancient Egypt. You might hear in conversations that they were treated as gods, magical entities, 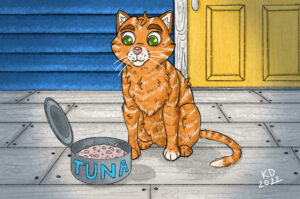 You Just Found a Cat Outside, What Now?

Many of us have found ourselves in this situation. We just rescued a cat from a bad situation, or perhaps one that seemed lost, and 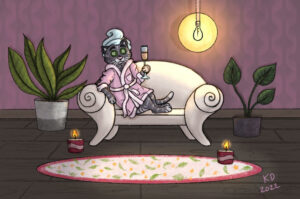 Tips for Grooming a Cat

Cats are naturally clean animals, but sometimes they need help. Depending on the breed, cat grooming requirements can range from weekly to rarely.  As an 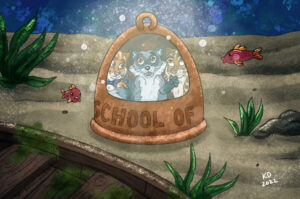 Gary and Morris Go for a Dive

Gary and Morris were walking through the Hervey Cats shelter talking about their summer plans.  “I just love summer,” said Morris. “I love the fun