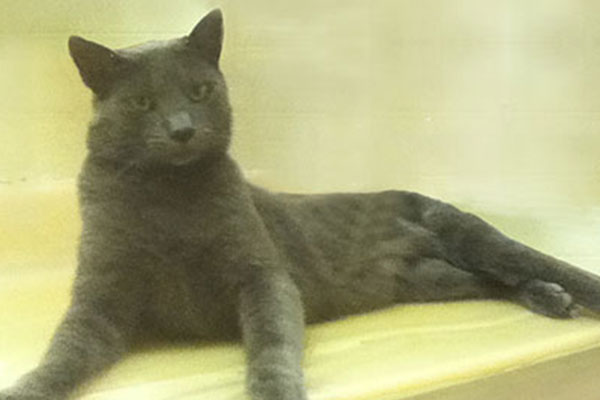 On a cold Wednesday night in February 2013, I received a ‘phone call from an employee of an Edmonton pet supply store. She indicated that a lady had entered the store carrying a cat and had walked directly to the cat food aisle. Assuming that the lady had brought her cat shopping with her, awhile later she was surprised to see the lady leaving the store very quickly but without the cat. The employee attempted to catch the lady, but she had jumped into a waiting car, which then sped off. They were unable to obtain a license plate number.

The employee proceeded to the cat food aisle and, lo and behold, there sat a beautiful blue (grey) cat. He was friendly and in no hurry to leave the immediate area. The cat was crated while the employee attempted to determine who would be willing to take the cat. I said that the Hervey Foundation would take the cat; if they could hold him overnight two of my volunteers would pick him up the next morning. Bright and early, Kathy and Margaret were at the store. The cat was housed in a huge crate in a quiet area of the store and he appeared unperturbed by all the commotion. He seemed to be “favouring” his left rear leg. At this time, we also determined that he was an intact male.

We left him in the large crate and transported him to the Foundation’s sanctuary – not a peep was heard during the one-hour car trip. The Foundation’s veterinarian was away, so the “rescue” would be housed at the sanctuary for a few days. By the time, he was delivered there, he had been christened Stephen by Kathy and Margaret.

I took him to the isolation area and opened the crate to check him out – right away the purring started – what a loving, gentle cat!! We coaxed him out of the crate and were horrified to view a twisted hind leg; it did not appear to be a recent injury. Obviously, no one had gotten veterinary help for him – we couldn’t imagine what pain he must be experiencing. It was apparent that he knew he was now in good hands and he continued to purr and rub against our hands. I gave him some pain medication and phoned for an appointment with our Vet.

Tuesday morning, Kathy and Margaret picked up Stephen and whisked him off to the Rosslyn Veterinary Clinic for assessment and treatment. I was almost positive that the verdict would be a leg amputation due to the delay between injury and treatment. Dr. Calin Catarig, owner of Rosslyn, took x-rays, which indeed showed at least two breaks, possibly more. He called me and suggested that he try to operate on the leg, rather than amputate immediately. He indicated that he would need to re-break the leg and attempt to set it so that Stephen could regain the use of his leg. He warned that it would be a lengthy surgery and the recovery period would be months, as the leg would be “pinned”. Surgery was scheduled for the next day and once in to the area, the damage was greater than initially thought. After the surgery was completed, Dr. Catarig and his wonderful staff waited anxiously to assess how Stephen had survived the procedure. Dr. Catarig telephoned to tell me that Stephen not only survived the surgery, but was doing well and still purring! He now had 4 pins in his leg and a lengthy recovery began. He was able to walk with restrictions, so as not to place excessive strain on tl1e area. He would require confinement and constant monitoring – he was ensconced in a huge dog crate in the living room, so that he could be part of the action and see the other cats. He thrived on the attention and became quite a “talker” – every time I went by, he meowed as if he had something new to tell me! After a week, he was allowed to come out of the crate and do a bit of walking. I was instructed on how to perform physiotherapy on his leg, so as to strengthen the muscles and speed recovery.

He enjoyed these walks in the house and this coupled with the on-going physio made him stronger and stronger. Stephen still displayed love and trust in us and purred full time – despite the pain he must have been in on many occasions. At last, the day came (late March) for another trip to the Clinic for more x-rays and possible pin removal – two of the pins were taken out and he was now granted more freedom. He was able to walk about on his own and was only crated at night or when I was out. His health progressed steadily and it was obvious that he was feeling much better. Finally, the last of the pins were removed (late April) and his gait was almost normal.

Stephen will be staying with the Foundation as one of our mascot cats and his story will be available for all to marvel at. I am so grateful that the staff at the Rosslyn Clinic took the time to put Stephen “back together” and enable him to regain a normal life. Stephen is a happy, playful part of the family and he loves to be with his “people” – he was a bit perplexed when “his” crate disappeared – it had been his home for so many months.

We will never know what circumstances led to Stephen’s injury and subsequent abandonment at the pet store – we can speculate about abuse and neglect, but we’ll never know for sure- we are just pleased that the lady did take the time to bring him where he would get help.

The Foundation sincerely thanks Drs. Calin and Andra Catarig for their care of Stephen over so many months – they truly care and are one-of-a-kind. I am privleged to have them as one of our vets.